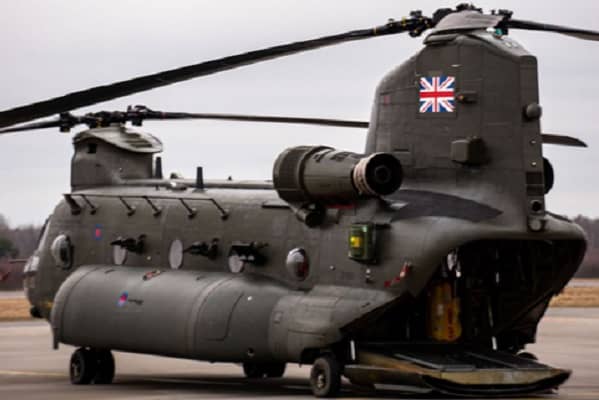 The UK has deployed Chinook helicopters who will work alongside Estonia Defence Forces which will help in the fight against Vladimir Putin’s forces.

The deployment of the Chinooks will “increase interoperability and capability” to fight Russian forces.

The Russian ambassador to Estonia accused “The Anglo-Saxons” of providing the Baltic state with “conventional weapons” which could “target Saint Petersburg.”

The Royal Air Force Chinook helos in Estonia in sign of strength and the Aviation Task Forces 3 are based at the Ämari Air Base.

The RAF sent three Chinooks from 18(B) Squadron as part of the Operation PELEDA who are based at RAF Odiham in Hampshire.

Personnel from the Joint Helicopter Support Squadron, Tactical Supply Wing, 244 Signal Squadron, and around 100 troops from the RAF and Army were deployed.

“The Chinooks will be working closely with Estonian Defence Forces to increase interoperability and capability.”

RAF Chinooks deployed to Estonia last week to support the UK-led NATO Enhanced Forward Presence. The Chinooks will be working closely with Estonian Defence Forces to increase interoperability and capability.

The Russian ambassador to Estonia Vladimir Lipaev said in an interview on the Soloviev Live TV, which is a Kremlin backed channel, “The Anglo-Saxons had an interest in creating an anti-Russian outpost here to put pressure on the Russian Federation.

“And we are talking not only about economic, political, cultural, but also military pressure.

“Estonia is actively arming, it’s not clear why, types of conventional weapons that are capable of targeting Saint Petersburg.

“A medium-range anti-missile defence system is being created.”

The British Defence Secretary Ben Wallace announced the Tallinn Pledge to support Ukraine which is reaffirmation of “strategic and coordinated” military support to member states within the EU.

There will be further deployments of Helos later in the year and the Aviation Task Force 3 will return back to the UK at the end of February.

Wallace warned Putin that the UK will continue to support Ukraine “this year, and the next year,” adding it is vital Russia understands they will be “pushed back, out of Ukraine” and sovereignty will be restored.

Wallace said the UK will send a further 600 precision-guided Brimstone missiles “into theatre” to help Ukraine.

Wallace told a news conference in Estonia, “This will be incredibly important in helping Ukraine dominate the battlefield.”

In a further warning to Moscow, Wallace said, “We’re not going anywhere Mr Putin, we’re in this for the long haul.

The Russian Foreign Minister Sergei Lavrov warned that Moscow is “almost in a real” war with NATO.