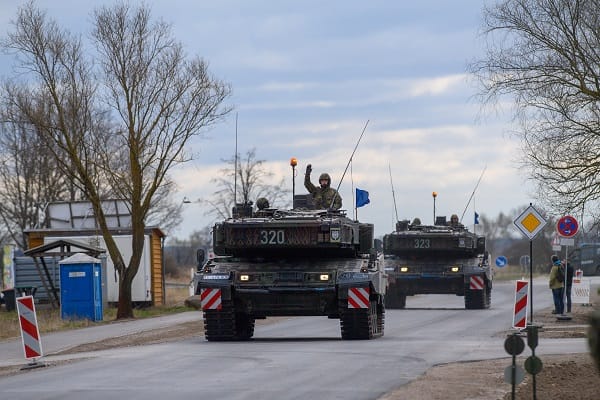 The Russian embassy in Berlin has warned that sending German main battle tanks to the “eastern front” is “extremely dangerous” and will lead to the “death of Russian soldiers” and also the “civilian population” in Ukraine.

Germany and NATO have announced that almost 200 tanks will be sent to the frontline in Ukraine to break the deadlock.

Germany will provide a company of the Leopard 2 tanks with ammunition and logistics along with Spain, Poland and Norway, the UK has already pledged a squadron of the Challenger 2 main battle tanks.

Berlin’s Russian embassy said the decision is “extremely dangerous” and this will now take “the conflict to a new level of confrontation” in Ukraine.

The Russian embassy added that they are “convinced” that Germany and NATO are “not interested in a diplomatic solution to the Ukrainian crisis.”

The embassy in Berlin warned that Germany are setting up the war in Ukraine with a “permanent escalation,” adding, “unlimited pumping of the Kyiv regime with more and more deadly weapons.”

In a statement the Russian embassy said, that “battle tanks with German crosses will again be sent to the ‘eastern front,’ which will inevitably lead to the death of not only Russian soldiers, but also the civilian population.

“It destroys the remnants of mutual trust, causes irreparable damage to the already deplorable state of Russian-German relations, casts doubt on the possibility of their normalisation in the foreseeable future.”

Speaking at a news conference in Berlin the German Chancellor Olaf Scholz said that sending their Leopard 2 tanks to Ukraine is “the right path.”

Scholz said, “We support Ukraine financially and with humanitarian aid and with arms. Despite the fact that we did not do that for many decades we have added to our support in cooperation with our international partners,” he says.

“That is the right path. Especially when we are talking about tanks.”

Iceland’s Prime Minister Katrin Jakobsdottir who was also at the news conference added, “sadly there is not end in sight” but it must end in peace.

“I think it is good that Germany is making this contribution in close cooperation with other partners and allies.”