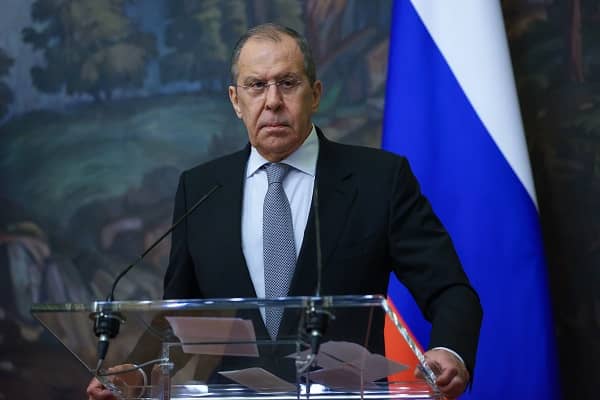 The Russian Foreign Minister Sergie Lavrov has compared the West to Adolf Hitler in trying to achieve the “final solution” and accused the US of “leading a war against our country.”

Speaking at a press conference in Moscow on Wednesday Lavrov said, “Like Hitler, who mobilised, captured, and mustered the majority of European countries, and threw them against the Soviet Union, the United States has formed a coalition with almost all Europeans.

“They are part of NATO and also the European Union.

“Through Ukraine as a proxy, they lead the war against our country with the exact same goal: the goal of the final solution to the Russian question.

Ukrainian families split apart by conflict will be reunited thanks to £100,000 gift from the Freemasons

“Just like Hitler wanted a final solution to the Jewish question, now, if you read the Western politicians, not only from the Baltics or Poland, but also those who are much saner, they univocally say that Russia must suffer a strategic defeat.”

Victor Medvedchuk who is a close ally of Vladimir Putin warned on Tuesday of the possibility of a nuclear war breaking out in Europe and warns he sees only two ways out of the war in Ukraine.

He added, “The amount of Western support clearly shows that the West has invested a lot in its war against Russia.

“It’s the West that makes the decisions. And it has made decisions for Ukraine and without Ukraine.”

He claimed that Moscow are ready to “seriously consider” and Western thoughts on ending the war in Ukraine, but “We haven’t seen any serious proposals yet,” Lavrov added.

Lavrov said, “It makes no sense to talk to the West only about Ukraine.

“The West is using Ukraine to destroy the security system that existed in the Euro-Atlantic region for a long time and hinged on consensus, the indivisibility of security and settlement of all issues through dialogue and cooperation.”

The Russian Foreign Minister said that relations between Moscow and the West “will never be the same” then accused the West of not observing agreements made with Russia.

Lavrov added, “Never again there will be a situation when you lie, sign documents and then refuse to fulfil them.”

Medvedchuk warned, “And now there are only two ways out: to slide into a world war and a nuclear conflict, or to start the process of detente again, for which it is necessary to take into account the interests of all parties.