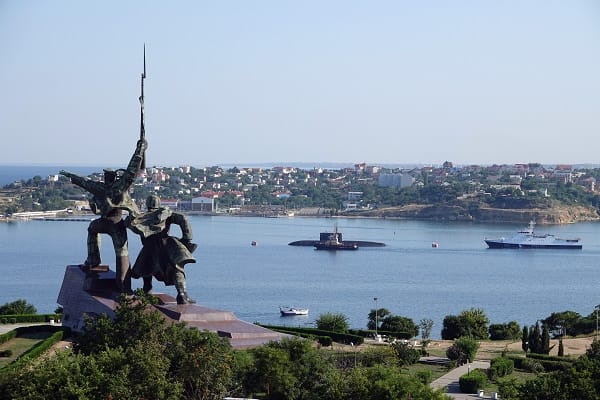 A Kremlin insider calls for Poseidon torpedo drones which can create “radioactive tsunamis” to be used against Britain for supplying 14 Challenger-2 tanks, which has to be taken “seriously.”

Retired general Andrey Gurulev said on Rossiya 1 that the deployment of British tanks is to be used “against us, to kill us,” which does amount to crossing a red line.

The British government announced on Saturday that they are to send a squadron of 14 Challenger 2 tanks to Kyiv which have been described as “game-changing” for Ukraine’s war against Russia.

Kremlin spokesman Dmitry Peskov dismissed the impact of the new arms being sent by Britain and warned they will “burn like the rest.”

Dmitry Kiselyov who is a Kremlin insider and a TV propagandist, said that Vladimir Putin warned on 24 February that “if anyone interfered with his special military operation,” there will be a strike on them.

General Gurulev said the UK are “getting cocky” warning that Britain could be destroyed without launching nuclear weapons.

He said, “We have to remember about London, so they don’t try to steal our victory. If it did not exist, there will be victory.”

General Gurulev, has also called for a giant nuclear test on the Arctic Island of Novaya Zemlya “so the whole earth shudders.”

This comes as the Russian state TASS news agency said the “first batch of nuclear-armed Poseidon drones” have been delivered.

Putin propagandist Dmitry Kiselyov called for Moscow to “plunge Britain into the depths of the Sea” by using the “underwater robotic drone Poseidon drones.”

A source told TASS today, “The first batch of Poseidon ammunition has been manufactured and will be soon delivered to special-purpose nuclear-powered submarine Belgorod.”

The Russian President sees the Poseidon torpedo missiles which approaches a target at one kilometre depth and the “warhead” has a “capacity of up to 100 megatons.”

The explosion creates a thermonuclear blast which causes a giant tsunami up to 500 metres and the “tidal wave is also a carrier of extremely high doses of radiation.”

This “tidal wave which is also a carrier of extremely high doses of radiation.

“Surging over Britain, it will turn what is probably left of them into radioactive desert.

“Permanently unusable for anything.

“Putin warned about this, back on February 24, if anyone interfered with his special military operation.”