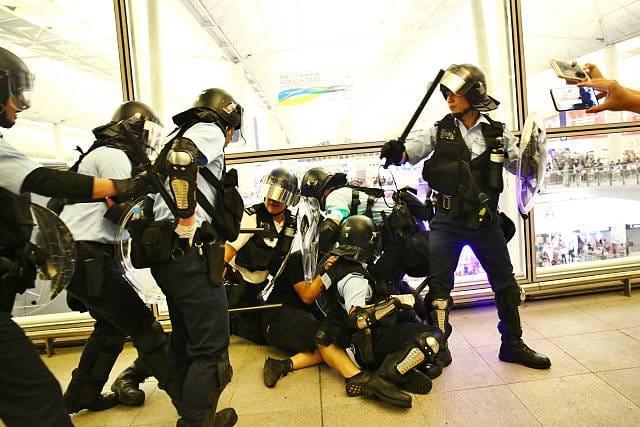 Chinese soldiers mass on border and Trump wades in

Chinese paramilitary troops were seen carrying out drills just a few miles from the Hong Kong border as tensions are mounting.

Thousands of paramilitary troops took part in parades inside a sports stadium waving patriotic flags, moving in formation and military on motorbikes are riding around the stadium outside.

The British Foreign & Commonwealth Office urged restraint in Hong Kong on Thursday night saying the situation should not cause any friction between the UK and China.

“This country and China have had very good relations in recent years, and have done a great deal together, and I look forward to doing even more in the years ahead.

“So, this should not be a cause of friction between us.

“I would urge restraint among those who have been engaged in violent behaviour over the past few days and I think we need to restore some calm to Hong Kong and proceed with dialogue.”

Protestors have taken the day off on Friday as they are preparing for a mass rally on Sunday where it is expected more than 1m people will attend.

He said on Twitter, “I know President Xi of China very well,” he said. “He is a great leader who very much has the respect of his people. He is also a good man in a ‘tough business’.”

However, there is an escalation in diplomatic rhetoric as the Chinese foreign ministry condemned US politicians and accused them of “colluding” with extremists involved in the uncontrollable anti-government protests in Hong Kong.

On Thursday Beijing’s ambassador to the UK said at a news conference that China will “not sit on its hands” over the protests in Hong Kong.

Liu Xiaoming said that if the situation deteriorates, they will act to “quell unrest” in Hong Kong, as it is Chinese territory however, it does operate under a different system.

Hertfordshire Police admit they ‘may have got it wrong’ arresting...