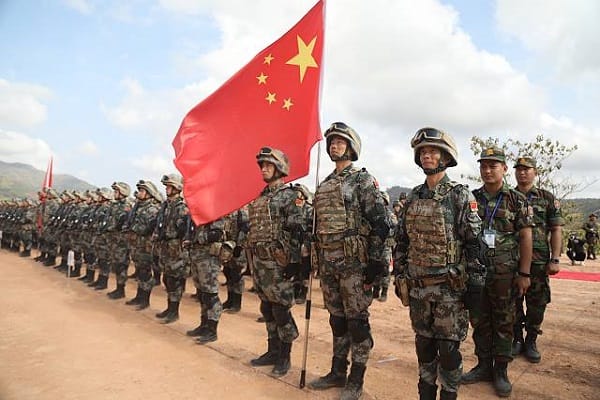 China prepares for War after political global backlash over coronavirus

China’s President Xi Jingping has received a global backlash from world leaders over his handling of the coronavirus, and as a result the country are stepping up their military preparedness.

Xi sent a chilling warning to the world as he said, China are now stepping up their preparedness for military combat, whilst attending a plenary meeting of the delegation of the People’s Liberation Army and People’s Armed Police Force at the annual session of parliament.

The statement was released by Reuters on Monday after China has seen increased attacks over the coronavirus pandemic.

The Chinese President has urged all his 2.7m troops to “fully understand, uphold and implement” the Communist party’s theories on “building a strong military, as well as its defence strategies” and all policies, the China Daily newspaper reported.

China have increased their military spending by 6% to an annual budget of £148bn, as Xi stressed he will continue to strengthen his armed forces during the pandemic, state media reported.

A classified report has warned that Beijing could erupt due to the rising hostility they are facing from global leaders over the pandemic, sources have said.

The classified report was presented by the Ministry of State Security to top leaders in Beijing, including President Xi.

Collin Koh, a research fellow at Singapore’s Institute of Defence and Strategic Studies, said Beijing senses the urgency to bolster their defences, as relations between Beijing and Washington are at an all-time low.

Koh warned, “A rollback on military modernisation, especially in numerical terms expressed in the defence budget, could send a wrong signal to the domestic and external audiences.”

Japan Chief Cabinet Secretary Yoshihide Suga said, “China continues to announce big defence spending increases and we urge it to be transparent about that spending, its military strength and national defence policy.”

This comes as China often under-reports their military spending, many foreign diplomats and experts believe.

John Supple, a Pentagon spokesman said, “China’s behaviour is concerning, especially in the absence of greater transparency in both military spending and the intent behind its actions.”

Beijing also said on Sunday, that relations with Washington are on “the brink of a new Cold War” due to knife edge tensions over the global pandemic.

Tensions have grown over the months as the US President Donald Trump has accused China over starting the global pandemic which has infected more than 5m people globally.