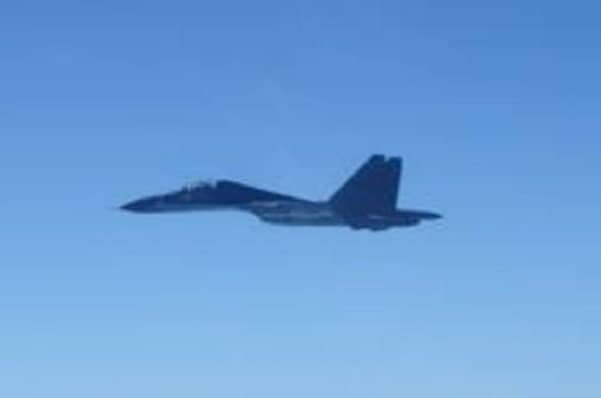 The US House of Representatives Speaker Nancy Pelosi has arrived in Taipei despite warnings this could spark war between China and Taiwan for her controversial trip.

As Pelosi plane was flying towards Taipei, “Taiwanese aircraft opened warning fire in the Taiwan Strait” it was reported shortly before 4pm UK time.

“Combat air-raid sirens” can be heard blaring out in the Fujian city of China and Beijing warned this afternoon that they “will take decisive measures to protect state sovereignty and territorial integrity – the Ministry of Foreign Affairs of the People’s Republic of China.”

On Tuesday “dozens of US Air Force fighter jets” were “lifted from bases in Japan to Taiwan” amid the high tensions over Pelosi’s disputed visit to Taipei.

An “undisclosed amount” of “Taiwanese aircraft have taken to the air” followed by “Chinese J-16 fighter jets appeared at the southern end of Bashi Strait,” Taiwanese media SETN reported.

🇨🇳Combat sirens have been activated in the Chinese province of Fujian pic.twitter.com/F1KhnX7PBl

Before Pelosi arrived in Songshan airport in Taiwan where the Taiwanese military removed “camouflage covers were removed from anti-aircraft guns” which re “installed near the runway” and also “radar systems” were also “brought to a state of readiness.”

Channel 4’s International Editor Lindsey Hilsum warned, “One of the senior American officials from the Defence Department said the other day: you know, the problem with all this is that sooner or later there’s going to be an accident.

“And that’s what people fear. That you’ve got that many warships and aircraft, you know, around in the region.

“And that I think is why the American military are very worried about Nancy Pelosi’s visits. It could be seen as provocative.

“And Joe Biden said this would not be a good time for her to do that.”

🇹🇼🇺🇸The delegation was met, they are going to the hotel. pic.twitter.com/bRCbhHYXdp

Earlier today large convoys of Chinese tanks were seen driving through the Fujian city and along a beach with horrified holidaymakers looking on, and the Peoples Liberation Army (PLA) has closed the airspace on Tuesday heading towards Taiwan.

Chinese foreign ministry spokesman Zhao Lijian warned on Monday that Beijing “will not sit back” in what he calls “a gross interference in China’s internal affairs,” then sent a further warning of “very serious developments and consequences.”

On Tuesday Lijian again warned, “If Pelosi insists on visiting Taiwan, China will take resolute and strong measures to defend its sovereignty and territorial integrity.

He added, “Those who play with fire will perish by it.

“We would like to once again admonish the US that we are fully prepared for any eventuality and the PLA will never sit idly by.”

Putin backs down and tells the UN there are ‘no...

Kremlin urged to launch the ‘unstoppable’ nuclear weapon Satan-2 and...

Putin backs down and tells the UN there...

Rising household expenses have led to a re-awakening among workers, who are increasingly reevaluating their personal lives

New research shows that UK and Irish employees are willing to quit their jobs in search of a better work-life balance, alongside the option to have more flexible …

Ipsos: Doctors and scientists are seen as...