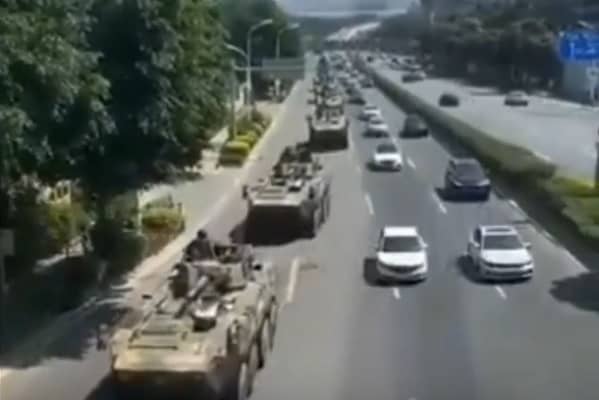 Large convoys of Chinese tanks have been filmed arriving at a Fujian beach panicking holidaymakers over fears China is soon to attack Taiwan and the Peoples Liberation Army (PLA) has closed the airspace on Tuesday.

The southeastern Fujian province in China is separated from Taiwan, by the narrow Taiwan Strait which is around 180km wide.

Xiamen is a nearby port town in Fujian which is the closest point within China to reach Taiwan and also Chinese armoured vehicles have been deployed to Pingtan which is a large island in the Fujian province and sits just 125km from Taiwan.

Chinese warplanes have flown close to the median line which divides the Taiwan straight, along with several Chinese warships, a source told Reuters.

This comes as the US House of Representatives Speaker Nancy Pelosi is set to visit Taiwan this evening which China claims as being their territory and have rejected Taipei’s announcements of independence.

Chinese foreign ministry spokesman Zhao Lijian warned on Monday that Beijing “will not sit back” in what he calls “a gross interference in China’s internal affairs,” then sent a further warning of “very serious developments and consequences.”

On Tuesday Lijian again warned, “If Pelosi insists on visiting Taiwan, China will take resolute and strong measures to defend its sovereignty and territorial integrity.

He added, “Those who play with fire will perish by it.

“We would like to once again admonish the US that we are fully prepared for any eventuality and the PLA will never sit idly by.”

The White House’s National Security spokesperson John Kirby said, “We will not take the bait or engage in sabre rattling.

“At the same time, we will not be intimidated.”

In a now banned tweet, quoted in Insider, Hu Xijin, a commentator with the Chinese-state-owned Global Times, wrote, “If US fighter jets escort Pelosi’s plane into Taiwan, it is [an] invasion.

“The [People’s Liberation Army] has the right to forcibly dispel Pelosi’s plane and the US fighter jets, including firing warning shots and making tactical movement of obstruction.

“If ineffective, then shoot them down.”