Home Lifestyle NewsFood & Drink News Brown's beer: The Olympics are coming to a pub near you 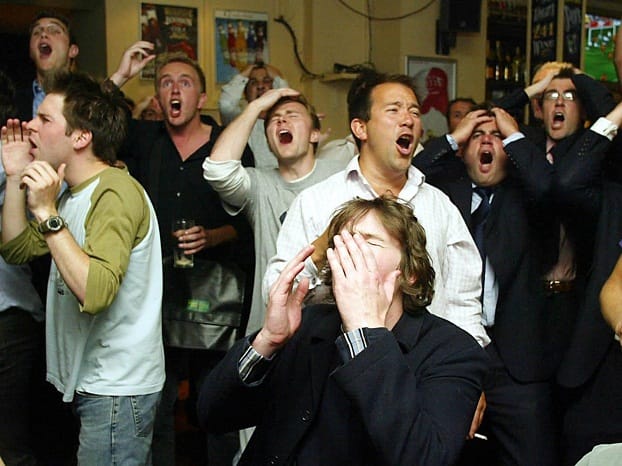 Brown's beer: The Olympics are coming to a pub near you

Rain, no Olympic tickets, and traffic jams. Don’t despair, your local is here to save your summer

Remember when? English fans watch England against Portugal in the Euro 2004 quarter-final, at the Elusive Camel pub in Victoria, London.

If you read this column with any measure of regularity you’ll have gathered that pubs are facing all kinds of problems just now – a 42% rise in beer duty in just four years; spiralling rents dictated by heartless pub companies; and twenty-four cans of Stella for twelve quid in Tesco’s being just a few.

Our pubs needed a shot in the arm, and this summer was going to be an adrenaline syringe right to the heart.

Pubs always thrive during big sporting events, especially if the home nations do well, and here we had a near-constant diet of Euro 2012, Wimbledon, the Olympics and Paralympics in our back yard, with the Diamond Jubilee and an extra two days off work thrown in.

What could go wrong?

And then we had the wettest April on record, a pretty poor May, and the wettest June on record. Writing this the day after a month’s rainfall in twenty-four hours, it looks like July is sure to get into the record books too.

Bad weather in summer is bad news for pubs.

We decide to rush home from work instead of soaking up the evening sun on city pavements with a pint. We look out of the window and decide we’ll watch Andy Murray lose with a cup of tea and a slice of toast rather than a bottle of Magner’s and a packet of McCoy’s.

It’s not even that we choose to drink at home instead, we simply feel less like drinking and having a good time with friends in the first place.

Even the most joyless Daily Mail-reading neo-Puritan must admit that pubs are suffering a run of luck even worse than that of Murray himself.

Writing this with the light on because it’s dark, even though the sun supposedly rose two and a half hours ago, it takes a great effort of will to summon up any optimism. But I must – because the pub is STILL capable of delivering a special summer.

Beer garden barbecues may have been rained off but the big screens are still inside, and there’s still plenty of sport to come.

Ever since Sky made it unaffordable for most of us to watch football at home, the pub has reinvented the experience of being a passive spectator. Descending on the plasma screen down at the local, we discovered that many like-minded people had done the same, and this heightened the experience.

Pubs have always been about community. And while our communities today may be increasingly atomised, sport brings us together.

Sport and the pub simply work.

My local in North London, the White Hart, has pulled off the clever trick of being an Arsenal pub for Arsenal fans and a Spurs pub for Spurs fans, being roughly the same distance from their respective home grounds. And when the two play each other, the pub plays host to a friendly rivalry that never gets out of hand because everyone knows, or at least feels, that trouble will not be tolerated, in a way that’s both more subtle and more effective than lines of mounted police could ever be.

I first recognised how much this mattered nine years ago when I watched England win the Rugby World Cup in the comfort of my front room, because I thought the pub would be too crowded. As I leapt up and punched the air when Johnny Wilkinson’s dropkick cleared the bar, I felt like the loneliest, stupidest armchair fan in the world.

I knew that at that moment the White Hart would have erupted, that the whole place would be screaming, everyone hugging each other and sharing the moment.

It’s become a truism among sports fans now that watching the game in the pub can be almost as good as being there in person. But some 2007 research conducted by Canterbury Christ Church University in Kent suggests the pub can be even better than the real thing. “You are not confined to your seat,” said Professor Mike Weed, adding, “Because the space is smaller the chants feel more intense and louder than at the ground.”

In a pub with a decent plasma screen, the view is probably better than you get from many seats in the stadium. Even with that 42% increase in beer tax, it’s going to cost you far, far less than going to the game – and that’s if you’re lucky enough to get tickets in the first place.

Most of us don’t have tickets for the Olympics and Paralympics, and even if we did, we’d be confined to one event.

Watch it down your local pub instead, and you flit effortlessly from track to field to pool. You have a greater choice of beer than Heineken – and only Heineken. Going back to my column a month or so ago, you won’t face arrest for sponsorship infringement if you display non-approved branding. And even in the West End, it’ll cost you less than seven quid a pint.

And the beauty of the pub – especially the London pub – is that if you don’t like sport, it’s also the best place to avoid it. For every boozer advertising its huge plasma screen, there’s another one boasting that it doesn’t have any screens at all, proudly declaring itself a sports-free zone.

The pub has always been the perfect place to escape the frustrations of modern society.

With the Olympics just a couple of weeks away now, those frustrations will multiply off the field, as we find ourselves prevented from travelling around our city to make way for VIPs and sponsors, and the regulations about what we are and are allowed to mention regarding the games come into full, absurd force. A London pub is on your doorstep, still easy to get to, and feels close enough to the action without any of the hassle.

It was going to be the perfect summer for pubs. With the right attitude, it still might be.

Brown’s beer: Dislike Heineken? You could be arrested at the Olympics

Brown’s beer: Why pubs must wake up to women

Pete Brown is one of the UK’s leading beer writers, working across business and consumer press. He’s the author of several best-selling books and blogs at petebrown.blogspot.com. He was recently named joint-37th most influential person in the British pub i
ndustry – a claim he strenuously denies.