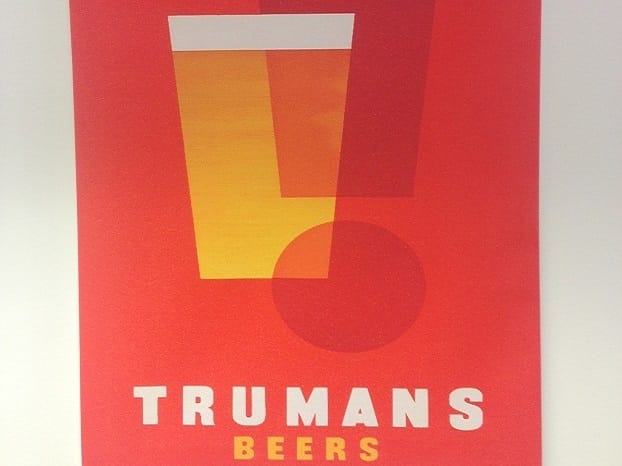 We’ve all propped up the bar of a pub somewhere in London that has a magnificent stone eagle perching above the door outside, or has the words ‘Truman, Hanbury & Buxton’ running under the eaves. Or we’ve looked at that magnificent chimney looming over the building still known as the Old Truman Brewery on Brick Lane. And, like the bloke in the late nineties urban myth who supposedly copyrighted the name ‘Twenty-First Century Fox’ and sold it to the film company for millions, we’ve thought, “You know what? Someone should start up the old Truman Brewery again. You’ve got ready-made advertising across the whole of East London. You couldn’t fail.”

James Morgan used to do this all the time. He stared at the Truman’s chimney every day from the office where he worked for a beer import business, and drank in Old Truman’s pubs every Friday, banging on to his mates about why there was no Truman’s Brewery any more.

And then, unlike the rest of us, he did something about it.

The financial crash of the late noughties featured, among other things, a sharp reversal of sterling’s strength against key foreign currencies, and businesses such as the one that relied on importing specialist foreign beer at affordable prices collapsed. So James decided to find out who owned the Truman’s brand and what – if anything – they were doing with it.

Joseph Truman began brewing in 1666 at William Bucknall’s new brew house in Brick Lane. In 1679 he acquired the site on Bucknall’s death, and changed the brewery name to Truman’s. One of the first large-scale industrial brewers, the business grew to supply the British Army, the East India Company and the Russian Court. For a brief time in the late nineteenth century, Truman’s was the biggest brewer in the world.

Like most large breweries, when beer volumes started to decline in the 1880s, Truman’s floated on the Stock Exchange to raise cash to buy the pubs that sold its beer. This strategy ultimately spelled doom for many legendary brewing names. Cosy, family-owned brewer mentalities persisted in businesses where gradually, the pubs became worth more than the beer – while the owners often remained oblivious to the shift. In 1971 Truman’s was bought by Grand Metropolitan after a fierce bidding war with Watney Mann. No one was that interested in the brewery – they wanted the 1300 undervalued pubs Truman’s had built up in London and the South East. The brewery was closed down in 1989, and the pubs were sold on.

This buying and selling continued, to the point where each of the global conglomerates that now own most of the British beer market have filing cabinets full of once iconic, sometimes forgotten brands. After some considerable digging, James Morgan tracked down Truman’s to Scottish & Newcastle.

So deeply buried was it in their archives, the brewing giant had no idea they actually owned it, and told James he was mistaken. When he sent them copies of the trademark registration documents proving their ownership, the company swiftly changed tack and said that under no circumstances would they sell such a valuable, treasured asset.

James persisted with letters and phone calls, and was passed from department to department until an external legal firm proposed a licensing agreement. When the paperwork arrived, it contained no targets, no limits, and no proposed royalty. When James contacted the company to point out that their legal representatives had in effect given him free rein to use the brand however and for as long as he wished, a sale was finally agreed.

While all this had been happening, the ever-optimistic James Morgan and his colleague Jack Hibberd had quietly begun brewing the first Truman’s beer at Everard’s Brewery in Leicester. With the brand secured, they could now raise capital and look for premises to build own brewery.

Like everything else in this story, this was far from easy.

“I wanted to go in at a reasonable scale, so I always knew I wanted a 40-barrel brewery,” says James. “The trouble with that size was finding a site that had enough water, gas and drainage, space outside for lorries and no potential for noise problems with neighbours.”

The search for such a site took over a year. “The problem was finding a five or six thousand square-foot space that wasn’t being snapped up by property developers to turn into ‘luxury apartments’,” says Jack, an East London native who was raised in Clapton. He’s clearly proud of East London’s industrial heritage, and fizzes with excitement over the site Truman’s eventually secured in Hackney Wick.

“Did you know,” he says pointing to the building across the road from the Eyrie, the brand new Truman’s brewery, “that building there, the Algha Works, made every single pair of NHS specs for years? And this is where the world’s first ever plastic was manufactured!”

It’s a perfect fit. There are enough hipsters and housing developments here to provide local custom, but Hackney Wick has so far retained an industrial grittiness that has survived Olympic airbrushing. (While we chat, there’s a good old-fashioned trade union picket line outside a factory just around the corner.)

On the day of my visit in late August, the new brewery had been in operation for just over a week, and we taste the first brew of flagship beer Truman’s Runner (4% ABV), described as a ‘bold best bitter’.

“Our aim is to make beer for everyone, that tastes great and is consistently good,” says James. “We all love great craft beer here, we’re huge fans, but we constantly ask ourselves what Truman’s would have been brewing today if they had kept going.”

This beer is a work in progress as they get used to the new plant. It’s not quite there yet, but already has a wonderful springy hop aroma, a nice buzzy finish, and a seductive crystal clarity that makes me realise how accepting we craft beer fans have become of cloudy beer – whether the brewer intended it to be or not.

We also taste Swift (3.9% ABV), a ‘gorgeous golden ale’, and UK Gold and US Pale (4.3% and 4.6% respectively), two beers being developed for a face-off in Nicholson’s pubs. After a consumer vote, the winner will become a regular beer.

The finale is London Keeper (8%ABV) a mighty export stout exhumed from Truman’s brewing archives, dating back to 1880. It’s going into 750ml wax-sealed bottles with labels printed by Baddeley Brothers, the hackney stationers that dates back to 1859, on an antique old letterpress. Only 2,500 bottles will be released, and it’s a silky, chocolatey, vinous essential for Christmas Day. Look out for it. Put it on your present wish list. In fact, mug, steal or blackmail to get it if you must.

With space to store 2500 casks, and talk already of installing more fermenters, Truman’s is confident that it will soon be supplying many more pubs than those that still bear the eagle logo that has now been so satisfyingly revived. The 1950s Abram Games Truman’s poster sitting on the office wall would look at home in any contemporary bar. The Firkin Club, a gathering of up to three generations of former Truman’s employees, maintains a conscientious programme of sampling the beers – all of which are brewed with the original Truman’s yeast, rescued from cryogenic storage – for quality control. As East London’s stone eagles remind us, great icons refuse to stay dead. In the centuries-long history of this venerable brewery, its 24-year absence from London is destined to become seen as a relatively brief blip.

Pete Brown is the author of the newly published Shakespeare’s Local, an amusing romp through six centuries of history through the George Inn near London Bridge, watering hole to Chaucer, Dickens and the Swan of Avon. It is currently Radio 4’s book of the week. Pete is also celebrating
being crowned Beer Writer of the Year for a second time.

Brown’s beer: You should drink beer with your food and not wine