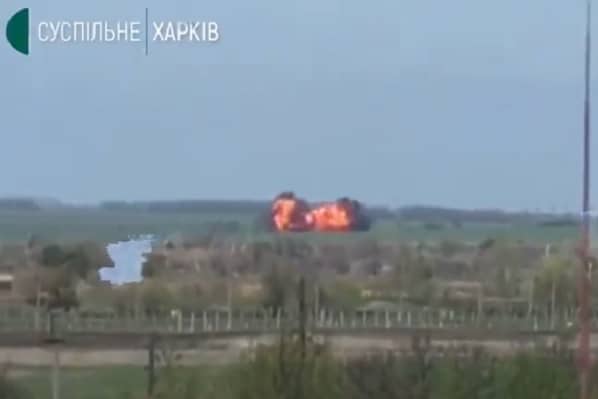 Air raid sirens were heard in Russia overnight at a key military airfield just over 430 miles away from Moscow, which comes as airbases in the country are coming under increased threat.

The airfields have been a launch pad for cruise missiles and bombers taking off to blow up key energy infrastructure sites in Ukraine.

The Kyiv Independent reported that overnight air raid sirens blasted and the district official Yevgeny Shpolsky said there was “no threat to civilian infrastructure.”

Vladimir Putin has vowed “necessary” measures after airfields came under attack and an oil storage tanks exploded near to the city of Kursk, in the Bryansk region of Russia.

Putin said on Wednesday afternoon, “First of all, of course, we will focus on peaceful means, but if nothing else remains, we will defend ourselves with all the means at our disposal.”

Putin then complained that the West are treating Russia as “a second-class citizen that has no right to exist at all,” he then admitted that the war in Ukraine is going to be a “long process” meaning there is no end to the conflict in sight.

Very high resolution satellite image of the damaged Tu-95 at Engels Air Base.

Putin has also ordered the military to dig trenches and build a system of bunkers inside Russia as the Kremlin has said there is a “credible threat” that Ukraine could mount a cross border attack in the Russian Federation.

On Monday and Tuesday explosions rocked Putin’s airbases deep inside Russia as the Kursk airport, Dyagilyaevo and Engels 2 airbase, south east of Moscow were attacked.

Fire has been extinguished at Kursk airfield after over 24 hours pic.twitter.com/J3GVTv2BmG

They added, “At this point, the five-ton tanks were empty and a serious fire was avoided.”

Putin met with his Security Council as there has been “significant failures” within Russia’s air forces as drones, which are most likely Ukrainian are attacking key military sites deep inside the Russian Federation.

Peskov told reporters that the “line openly declared by the Ukrainian regime to continue such terrorist acts is a danger factor.”

Serhiy Zgurets, a Ukrainian military analyst wrote on a Ukrainian media website, “It is still too early to say what is at issue here, but the ability of the armed forces of Ukraine to reach military targets deep in the territory of the Russian Federation has a very symbolic and important meaning.”

The attacks at the airbases have caused panic among Russian military bloggers, military blogger Readovka wrote on Telegram, “With a high degree of probability, the drone worked from our territory, which means that enemy DRGs have already reached the banks of the Volga.