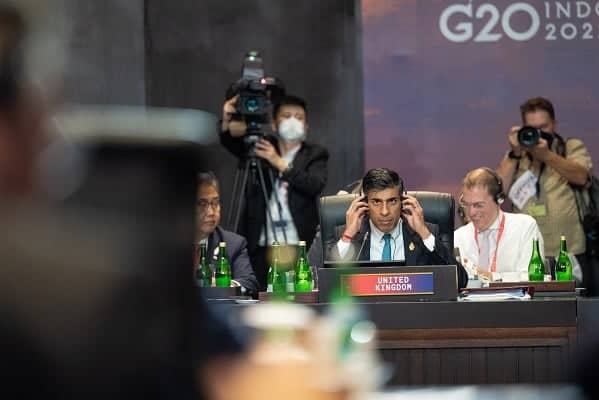 The British Prime Minister blasted Vladimir Putin as he has shown “utter contempt for the international rules-based system” for launching more than 100 cruise missiles in Ukraine on Tuesday.

Rishi Sunak said at the end of the G20 summit in Bali that Western leaders will establish how a missile came to hit a Polish village near to the Ukrainian border.

There has been reports that it was Russia who fired the missile but the US President Joe Biden said this is “highly unlikely” that Moscow was behind this, but “we will see.”

Sunak told the G20 summit in his closing, “That was happening at a time when the G20 was gathered trying to find resolution to some of the world’s challenges and the same time Putin was raining down indiscriminately that volume of missile attack.

“I think it shows utter contempt for the international rules-based system.”

Overnight the British Prime Minister spoke with the Polish President Andrzej Duda and Ukraine’s President Volodymyr Zelensky over the incident.

President Zelensky said that the missile strike is “a very significant escalation” and Moscow strongly denies any involvement.

Sunak insisted that this would not have happened if it was not for Russia’s illegal invasion of its neighbour.

He said, “This is the cruel and unrelenting reality of Putin’s war.

“The persistent threat to our security and global asphyxiation has been driven by the actions of the one man unwilling to be at this summit – Vladimir Putin.

“There isn’t a single person in the world who has not felt the impact of Putin’s war.”

Downing Street said that Sunak offered the Polish Prime Minister “any assistance needed” to help with the investigation.

“The leaders agreed to remain in close contact and continue co-ordinating with our international partners, including Nato allies, on the next steps,” a spokesman said.

The Russian Ministry of Defence said on Wednesday morning that this is a “deliberate provocation” by Warsaw.

The Russian MoD said, “No strikes were made against targets near the Ukrainian-Polish state border by Russian weapons.”

They added, “The fragments published in hot pursuit by the Polish media from the scene in the village of Przewoduv have nothing to do with Russian weapons.”

Warsaw are now seriously considering to invoke Article 4 today during an emergency meeting with NATO.

Poland’s Prime Minister Mateusz Morawiecki said that they will now increase “monitoring of polish air space” while an investigation is carried out to establish the cause.

Poland’s President Duda said, “We have no conclusive evidence at this time as to who launched this missile.