Home Business News Poland warns of ‘significant escalation’ over how NATO will respond, but Putin blames Warsaw for ‘deliberate provocation’ 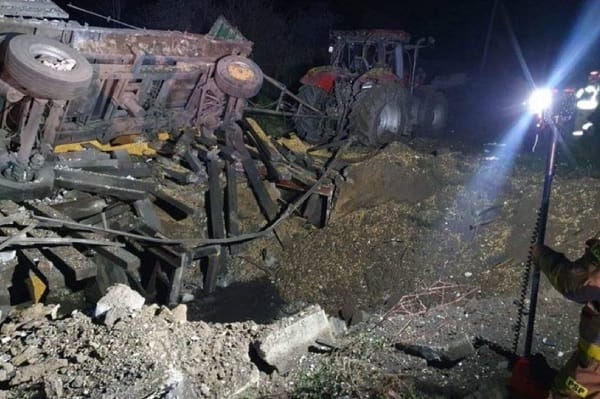 Poland has placed their Armed Forces on “high alert” after a missile hit a Polish village Przewoduv, and there unconfirmed reports that it was a Russian missile and other reports are strongly hinting that it could have been a stray Ukrainian air defence rocket.

The Russian Ministry of Defence said on Wednesday morning that this is a “deliberate provocation” by Warsaw.

The Russian MoD said, “No strikes were made against targets near the Ukrainian-Polish state border by Russian weapons.”

They added, “The fragments published in hot pursuit by the Polish media from the scene in the village of Przewoduv have nothing to do with Russian weapons.”

However, on Tuesday Russia launched a “massive missile attack” on Ukraine which also struck Lviv which is just 62 miles away from the Polish village.

A senior US intelligence official told Associated Press that the missile was Russian and did come from Russia and Warsaw are now seriously considering to invoke Article 4 today during an emergency meeting with NATO.

Poland’s Prime Minister Mateusz Morawiecki said that they will now increase “monitoring of polish air space” while an investigation is carried out to establish the cause.

Poland’s President Duda said, “We have no conclusive evidence at this time as to who launched this missile.

Ukraine’s President Volodymyr Zelesnky said, “Today, Russian missiles hit Poland. This is a very significant escalation and we must act. How many times has Ukraine said that the terrorist state will not be limited to our country? It is only a matter of time before Russian terror goes further. Terror is not limited to our national borders.

“I want to say now to all our Polish brothers and sisters: Ukraine will always support you! Terror will not break free people!

“Victory is possible when there is no fear! You and I don’t have it. Let’s do everything to stop her!”

Professor of Strategic Studies at the University of St Andrews, Phillips P. O’Brien, said: “The consultation will probably result in more support for Ukraine, particularly air and anti-air power. Will give Poland some real influence.”