Fashion designer and American icon Tom Ford has been crowned as Europe’s most popular luxury brand, according to independent research conducted by Kelkoo, the largest pan-European ecommerce advertising and shopping comparison service.

The study reveals the most searched for luxury brands across Kelkoo’s shopping platform and analyses online spending habits across all major European retail markets, including the UK, France, Germany, Italy and Spain. Tom Ford was amongst the top ten most popular luxury brands in each country, ranking third in 70% of these markets, cementing the American brand’s position as a key player across Europe.

In the UK, Prada tops the list as the most popular luxury brand, closely followed by Tom Ford and Versace for big-spending Brits. Fashion changes fast, however, as last year it was Chanel leading the way as Europe’s most popular ecommerce brand.

“Consumers demand convenience, whether they’re searching for bargain basement deals or luxury brands. This is where the online competition has the upper hand over stores as they can deliver a much smoother and convenient customer experience.”

“Retailers are becoming increasingly aware of the importance of online for their brands, instead of focusing on a purely in-store approach. Consumers are aware that they can secure world-class products at a reasonable cost online, however, an increased average basket size doesn’t mean that luxury shoppers aren’t also looking to make a saving.”

“The retail landscape is evolving, due to new consumer demands, also affecting the luxury market. Household names like House of Fraser, M&S and Next have struggled to attract customers and endured financial turmoil; likewise, luxury retailers will also be in trouble if they fail to enhance their omnichannel and customer experience offering.”

Kelkoo Group also examined how loyal shoppers are to brands on their doorstep, showing increased popularity in brands from their own country. For example, UK shoppers favour Stella McCartney, a brand which failed to make an impression in Europe yet tipped into the UK’s top 10. 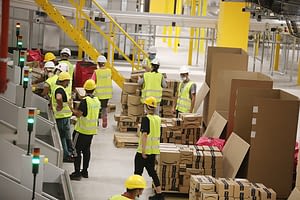 Despite widescale assumptions around Blue Monday (17 January) being the bleakest day of the year, workers are expressing overall satisfaction with their day-to-day job. This is according to new research …