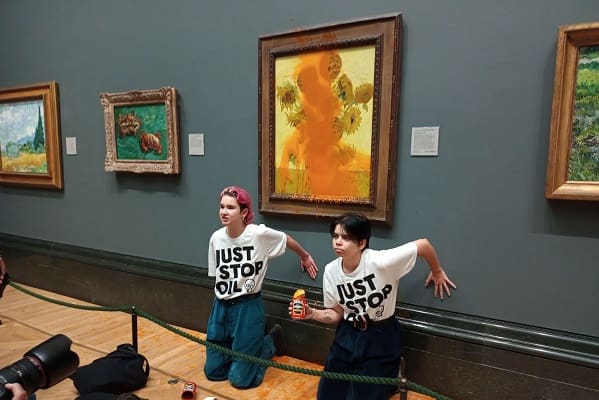 Nigel Farage has said that the Just Stop Oil protesters “who are getting up on the gantry’s on the M25” said have you noticed who they are?

Farage said that the latest one is called “Indigo” and general they are called “Jacasta” or “Sebastion” and they are nearly all “upper classed spoiled brats.”

He continued. that “clearly they have nothing better to do in their lives, they don’t understand fundamental economics, because they couldn’t give a damn about people going about their business, after most of these kids will probably never have to work.

“And hey if you miss your parents funeral it isn’t really their fault but of course there has been a narrative from Prince Charles, David Attenborough and right through the educational system and most of our political class that we are all about to die.

This week Suella Braverman, the Home Secretary, read the National Police Chief’s Council the riot act for the police to start arresting protesters, she said, “Criminal damage, obstructing the highway, public nuisance – none of it should be humoured.

“It is not a human right to vandalise a work of art. It is not a civil liberty to stop ambulances getting to the sick and injured.”