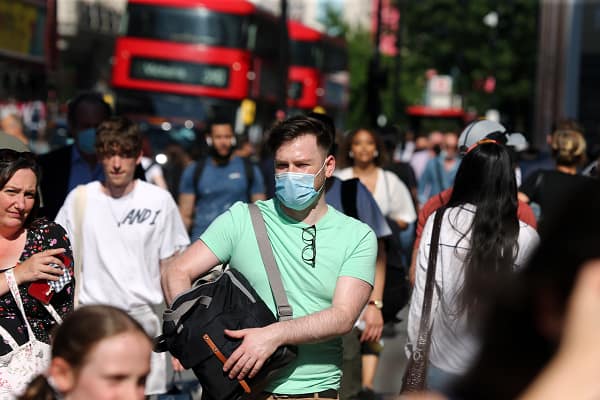 Covid cases are surging across the UK and there has been new demands for the government to introduce new “measures.”

Over the past week official data shows 2.7m people have had Covid which is up by 18% from 2.3m in private households from the previous week.

Health Minister Lord Syed Kamall was asked in the House of Lords what measures will the government introduce in England if Covid cases start to affect the NHS.

He told the House of Lords, “We are always ready to stand up measures should the case rates rise so much that our health system was under pressure, but also what we have managed to do is break the link between infections and hospitalisations, and hospitalisations and death.”

But he warned, “If it gets to a point where it is affecting the backlog then clearly measures may well have to be introduced.”

Lord Kamall said earlier, “We continue to see COVID-19 case rates and hospitalisations rising in all age groups, with the largest increases in hospitalisations and ICU admissions in those aged 75 and older.

“The largest proportion of those hospitalised are for reasons other than COVID, however COVID is identified due to the increasing case rates in the community and the high rate of testing in hospital, including among those with no respiratory systems.

“Current data does not point to cases becoming more severe.”

Dr Steve Griffin, a virologist at Leeds University said, “We are experiencing plateaus of infection between waves that are far higher than we ever had before last summer, simply due to the lack of mitigations in place.

“Leaving vaccines to deal with the pandemic alone simply isn’t working and we need to do more over the longer term to build resilience against such a high level of infections.

“This does not mean lockdowns but learning to pro-actively live with the virus, rather than passively ignoring and dismissing this infection, which remains a public health concern regardless of some wishes or personal choices.”

Putin deploys ‘round the clock’ warplanes equipped with...