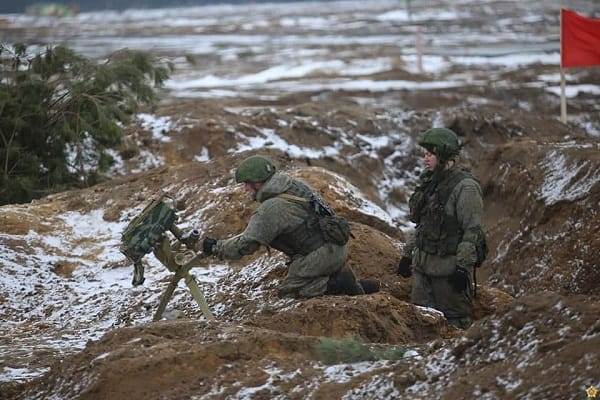 A Polish defence analyst has warned that the “everything points towards Belarus joining the war” as they have “practiced every military capability” to invade Ukraine with Russia.

There are growing fears that the mass build-up of joint activities of combat coordination of both Russian and Belarusian troops along with the military exercises is the highest since the Cold War.

The Belarusian Defence Ministry announced last Sunday that along with Vladimir Putin’s forces they are extending training exercises.

Ukraine believes that a new invasion from Belarus in the north could be imminent as the joint training between Putin and Alexander Lukashenko is fuelling fears he could join Russian forces in a fresh invasion, which could see them push towards Kyiv.

Konrad Muzyka described Belarussian forces as “a bit of a mystery” and said that the regular forces have been training virtually none stop since April 2022.

The Polish defence analyst told Sky News, “The intensity and the scope of military activity that the Belarusians have been undertaking has been the highest since the end of the Cold War.

“We have never seen Belarusian forces train so much. Since the end of April, they have essentially practiced every military capability that would be needed for Belarus to join the war.

“They have also tested the mobilisation capacity, they recently announced that they finished updating the data for all Belarusian reservists.

“What this means is that the reserve system is now ready for mobilisation. What we need now is a political decision to start mobilisation and go to war.

“Whether or not this will happen, we don’t know, because we have no insight into what [Belarussian President] Lukashenko is thinking.

“But everything points at Belarus joining the war sometime in the future.”

Ukraine’s Colonel Roman Voloschuk of the 104th Territorial Defense brigade, said he is confident his units will repel any new Russian invasion from the north.

He said, “They can try, but we’re ready for them. We’ve prepared, every turn and every junction has been dug up.

“There will be colossal resistance from every building.”

Muzak, head of the defence analysis firm Rochan Consulting, warned that the intensity of the joint military exercises in Belarus, are the highest since the Cold War.

The defence analyst believes there is a 50-50 chance that President Lukashenko could order as many as 200,000 conscripts, and Russia have 15,000 soldiers in Belarus that could also invade Ukraine.