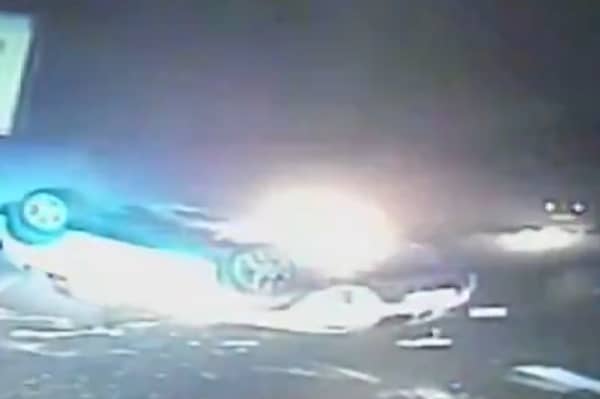 Dramatic video footage shows the moment a police car crashes, flips over and bursts into flames after driver recklessly hits the police car.

Chilling footage shows the driver, Wayne Smith undertaking a lorry on the hard shoulder at speeds of almost 100mph with a young child in his car, before ramming the police car during a high-speed chase.

Wolverhampton Crown Court heard that Smith was trying to evade police officers when he lost control and hit a marked police car.

Footage shows that police officers were trapped in the car after it caught fire, an officer can be seen rushing to the aide of the officers.

Staffordshire Police Officers were using specialist road policing tactics to try and box Smith on the M5 motorway between Junctions 22 and 21, in Somerset on 5 August 2019 at 9pm.

The Crown Court was told the police officers are lucky to have survived, and received multiple cuts and bruises.

Judge Barry Berlin, sentencing, accepted Smith had not deliberately “rammed” the police 4×4, but said that was “cold comfort” to the officer he injured.

Smith was jailed for two years and two months.

#JAILED This is the moment dangerous driver Wayne Smith brought his 260-mile attempt to make off from police to an end in August last year. The 27-year-old assaulted a woman in #Tamworth and made off towards Cornwall with a young child in the car. More: https://t.co/L9smvd3e0O pic.twitter.com/sNhYHMsV90