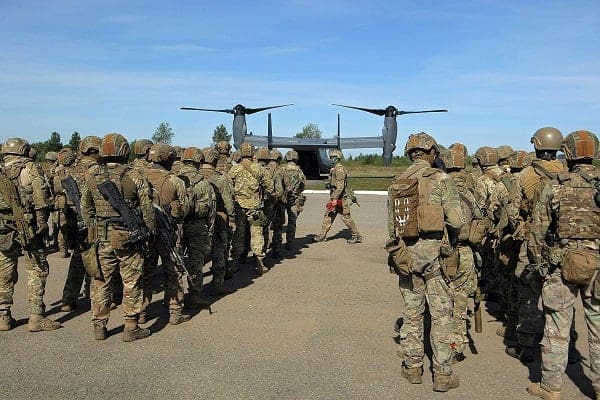 For the first time since World War Two the Pentagon have deployed the elite 101st Airborne Division to Europe to prepare for “nuclear training drills” amid Vladimir Putin and Moscow’s threats of launching a tactical nuclear weapon or a “dirty bomb.”

For the first time in eighty years, the US Pentagon has deployed the specialist division to Romania and will arrive from Kentucky and will be headquartered in Europe.

Colonel Edwin Matthaidess, Commander of the 2nd Brigade Combat Team, told CBS News, ” We bring a unique capability from our air assault capabilities. It’s also incredibly meaningful to us to return to Europe after eighty years away.”

Colonel Matthaidess added to CBS News that his troops are now the closest US forces to the fighting taking place in Ukraine.

The Colonel said, that from their vantage point, they have been “closely watching” the Russians, “building objectives to practice against” and they are conducting drills which “replicate exactly what’s going on” in the war in Ukraine.

He added, “It keeps us on our toes,” and we are “ready to fight tonight”

“We bring a unique capability, from our air assault capability… We’re a light infantry force, but again, we bring that mobility with us, for our aircraft and air assaults.”

HISTORIC DEPLOYMENT: CBS News has been given exclusive access to the Army’s 101st Airborne Division as they are deployed to Europe for the first time since the last World War. They are now the closest U.S. forces to the fight in Ukraine. pic.twitter.com/61sAvrCeVf

The 101st Airborne Division who hold the nickname of the “Screaming Eagles” operate in Black Hawks and will work alongside Romanian troops during a joint ground and air assault exercise.

Romanian Major General Lulian Berdila told CBS News, referring to the landmark World War II battle on France’s north coast, “The real meaning for me, to have the American troops here, is like if you were to have allies in Normandy before any enemy was there.”

An elite 101st soldier told CBS News, “Every shot has to count every training event has to be the best we could do as something that our allies want to emulate.

“And then, of course, our adversaries are watching a show of force for America’s allies and adversaries alike.”

The Russian Defence Minister Sergei Shoigu had a  call with French Defence Minister Sebastien Lecornu where, “They discussed the situation in Ukraine which is rapidly deteriorating. It is trending towards further uncontrolled escalation.”

The Ministry said he had told his French counterpart that Moscow are concerned that Ukraine could detonate a “dirty bomb” over their country which would be a device laced with radioactive material.

The Pentagon’s readout of the call said Lloyd Austin told the Russian Defence Minister that he “rejected any pretext for Russian escalation,” adding, he “reaffirmed the value of continued communication.”