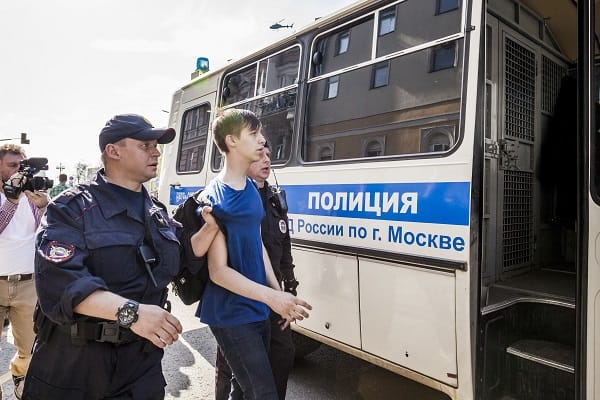 Thousands of demonstrators have been seen in Moscow and St. Petersburg, since last week which is “where the regime is based.”

This comes after the tyrant ordered more than 300,000 reservists to be called up to fight in Ukraine after suffering huge defeats.

Tens of thousands of Russian citizens have been protesting across Russia since last Wednesday which comes as young men have been served their drafting papers and were arrested and detained.

Professor Peter Duncan at UCL’s School of Slavonic and East European Studies told the Express.co.uk, “Putin and the Kremlin don’t want to have unrest in Moscow and St. Petersburg, because that’s where the regime is based.”

He added, “There’s a real risk, if you’re a man, going to a demonstration you’ve got a good chance of being sent to the front from that demonstration.

Professor Duncan continued, “So it’s not surprising, then, that there’s not very many of them. What is very clear is that so many people are willing to take the risk because, undoubtedly, they’re just the tip of the iceberg of people who think that way and they’re worried.

“[Putin will] send people there even though they’re not properly trained, and just hope that, somehow, they learn on the job.

“I mean, if you send someone who doesn’t want to go there in the first place, there’s quite a lot of you and you know that the war isn’t going well – then mutiny rather than desertion is a possibility.

“It’s clearly going to be something unpopular, which is why they haven’t done it.”

On Saturday Putin signed an order to increase prison terms to all those who are attempting to flee the mandatory call up to military service to fight in Ukraine.

Russians who are convicted of evading military service could face a sentence of up to ten years imprisonment, which has doubled from the previous five year term.

President Volodymyr Zelensky described the policy as a “mobilisation to graves” he added, “The Russian authorities are well aware that they are sending their citizens to death – there are no other options.”

President Zelensky is encouraging civilians to flee, saying, “It is better to run away from criminal mobilisation than to be crippled and then bear responsibility in court for participating in the war of aggression.”