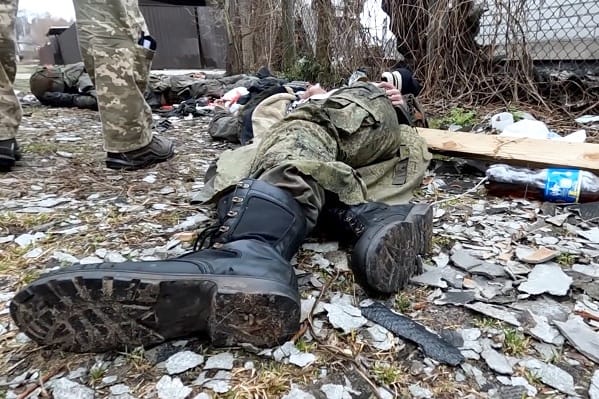 Anarchy has hit the ranks with the Russian Army as scared troops who “fleeing” Ukraine’s counteroffensive in Kharkiv where shot dead for being “deserters.”

Ukrainian Forces are delivering a powerful counterattack against Russian troops where by they have been “surrounded” on the Kharkiv front line in the northeast and panicked soldiers have been deserting their units to seek refuge.

A Ukrainian drone had captured the moment when a Russian military vehicle drove up to Russian troops who were fleeing the front and many are young teenagers.

Brigadier General Volodymyr Shvedyuk, a commander of Ukrainian units described the incident which took place in Kharikiv in detail.

He said, “Once our drone accompanied artillery fire. At that time, we gave the occupiers a good fight.

“So several Russian soldiers ran to their rear. We have seen this well online.

“A Russian Tiger drove up to them, from which their own soldiers got out.

“After a short conversation, the latter shot the deserters.”

He added, “They didn’t even think to take the corpses.

“All this was recorded on video, and everyone who saw it was simply amazed.”

President Volodymyr Zelensky’s troops have reached the Oskil river as Senkove and they have now cut of Russia’s main line of communication with forces based in Izyum.

Dan Snow, who is a military historian, said this is the “holy grail” for commanders which could be “annihilating.”

Snow said, “This….is mind-blowing. We are watching an army scythe through enemy lines, and thrust deep behind them, threatening to surround large numbers of troops.

“Envelopment is the holy grail. It can be annihilating.”

ISW analysts said, “Russian forces and occupation authorities in the rear of occupied Kharkiv Oblast are panicking to reinforce Russian positions and ‘evacuate civilians’ amid the high pace of the Ukrainian advance.

The ISW analysts added, “The Ukrainian pressure in Kherson combined with the rapid counter-offensive in Kharkiv presents the Russians with a terrible dilemma of time and space.

“Russia likely lacks sufficient reserve forces to complete the formation of a new defensive line along the Oskil River, as it is reportedly trying to do before Ukrainian forces continue their advance through that position if they so choose.

“Prudence would demand that Russia pull forces from other sectors of the battlespace to establish defensive lines further east than the Oskil River to ensure that it can hold the Luhansk Oblast border or a line as close to that border as possible.

“But Russian troops around Bakhmut and near Donetsk City continue offensive operations as if unaware of the danger to Luhansk, and Russian forces in Kherson still face attack and the threat of more attacks on that axis.

“Russian President Vladimir Putin risks making a common but deadly mistake by waiting too long to order reinforcements to the Luhansk line, thereby compromising the defence of Kherson or ending offensive operations around Bakhmut and Donetsk City without getting troops into position to defend against continuing Ukrainian attacks in Luhansk in time.”