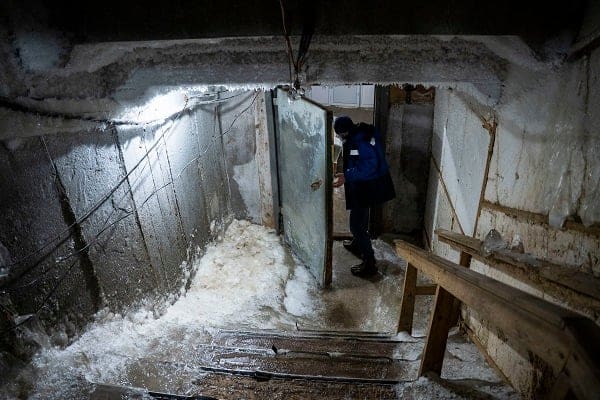 One of the world’s coldest places on earth are seeing temperatures plummeting to -46C in the Yakutsk region and the state has “categorically refused” to offer any help.

In the Satal district of Yakutsk residents have suffered with around eight hours of an outage and there is no “support from the state.”

Furious locals have taken to social media demanding help from the authorities as “sewer pipes” are frozen solid and “batteries burst” in people’s apartments.

A resident from the region asked, “Why don’t we have support from the state now?

“They categorically refused [to help].

“Among the victims are a lot of mothers with many children who simply cannot cope on their own.”

Another local complained that “Pipes are bursting, heating tanks are breaking down, everything is hard frozen.

“The local authorities were not prepared for this situation at all.”

Former deputy mayor of Yakutsk Vladimir Fedorov said, that “this is a man-made disaster.”

Yakutsk has around 1,200 residents who are now asking why is there no money to fix the most basic items, such as an electricity station?

A resident asked, “What do they need with this cash?”

“Putin finds money for war in Ukraine, hypersonic missiles, and his luxury palaces, while ordinary people are left to freeze.”

Western sanctions have not helped the situation as Vladimir Putin is now spending billions more on the war in Ukraine leaving thousands of residents in many parts of Russia without heating.

On top of this the Western sanctions are also hitting the ordinary Russian as they are struggling to stay afloat financially.

People living in many of the remote regions of the country, where conditions are at their worst, which includes Tyumen as well as Yakutia are among the worst affected in Russia.

The Beast reported, that Russian mothers had complained, saying, “They take young men—the only breadwinners—away and send them back in coffins.

“The guys freeze on the front, get sick, die while their families live in poverty.”

The mother added, “It seems authorities have no interest left in human lives at this point.”

Nikolay Zolotov, a Russian blogger who lives in a republic in Siberia, told the Beast: “Dark times. Ukraine is surviving without heating and light and here in Khakasia our life is awfully hard.”

“Bursting pipes is not the worst problem: people live on tiny salaries in a poorly maintained city, without cash to buy food, while our government spends billions on the special operation in Ukraine,” he added.