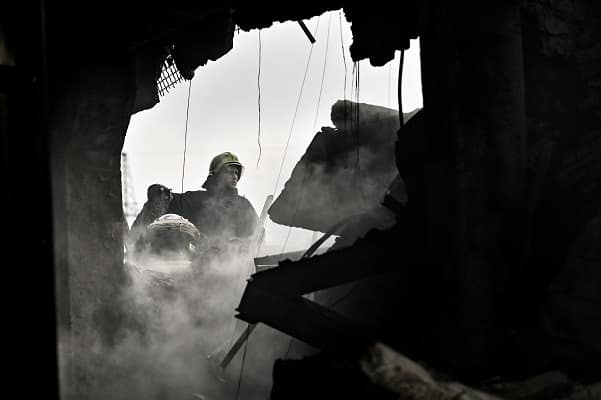 Last night air defence systems were heard in the city of Sevastopol in Crimea as Ukrainian long-range drones triggered Russian forces to shoot down two of them.

In the early hours of Wednesday morning air defence systems were triggered twice, Petro Andriushchenko, an advisor to the Mayor of Mariupol said.

Mykhailo Razvozhaev said that “in the morning, the air defence system shot down two UAVs over the sea in the Belbek area,” who is the Russian appointed governor of Sevastopol.

The Belbek area is home to Belbek military airfield which houses scores of military equipment, and Sevastopol is a vital port city for Vladimir Putin which is also home to the Black Sea fleet.

The Black Sea fleet in Sevastopol have been launching long-range cruise missile attacks across Ukraine blowing up their critical energy infrastructure over the months.

Jason Jay Smart who is a correspondent at the Kyiv Post warned, that “Russians need to feel that they are no longer safe, that this is not far away war on TV.”

He added, that “in 2023, Ukraine is forcefully bringing the war home to Russians.”

This comes as the head of Ukraine’s military warned Moscow that their strikes will go “deeper and deeper” into Russia.

Over the past few months there has been many reports which suggests Ukraine could have carried out the attacks on Russian territory.

The head of Ukrainian military intelligence, Kyrylo Budanov, said on Wednesday that he is “very glad” a Russian airbase was attacked, but stopped short of admitting Kyiv was behind the drone attacks in Crimea.