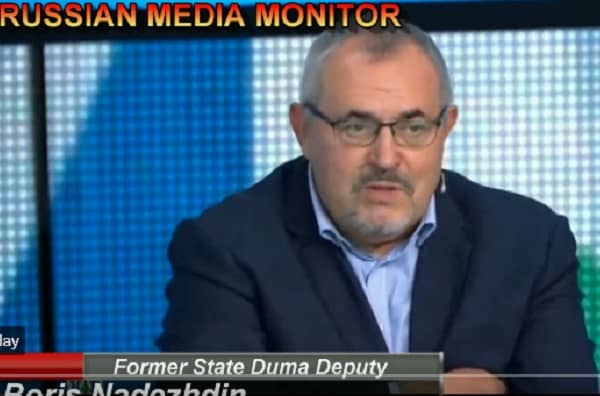 A former politician blasted Putin Russian TV saying that the Russian “military is failing and their country is in trouble” after a humiliating defeat in Kharkiv Oblast where Ukrainian forces have pushed back Russian troops near to their border.

Russia has been taken by surprise amid Ukraine’s counteroffensive which has rocked the Kremlin’s foundations.

Last week Putin said that Russia “has lost nothing” over the “special military operation” in Ukraine, despite more than 80,000 troops having been annihilated in fierce fighting.

Speaking on Sunday, the former state Duma deputy, Boris Nadezhdin, said, “People who convinced President Putin that the special operation would be fast and effective, we won’t strike the civilian population […] these people really set all of us up.”

Life comes at you fast: pundits on Russian TV realize that their military is failing and their country is in trouble. They are starting to play the blame game. Some of them finally understand that their genocidal denial of the Ukrainian identity isn't working in Russia's favor. pic.twitter.com/jNNn5xifI5

He was then asked if these people definitely existed, he replied, “Of course, the president didn’t just sit there and think, ‘Why don’t I start a special military operation?’”

“Someone had to be telling him all this.”

He continued, “It’s absolutely impossible to defeat Ukraine, using those resources and colonial war methods, with which Russia is trying to wage war using contract soldiers, mercenaries, no mobilisation, a strong army is opposing the Russian Army, supported by the most powerful countries.

“I’m suggesting peace talks about stopping the war, and moving on to dealing with political issues.”

State Duma deputy Sergey Mironov concede, “this is a serious army and their weapons are serious.”

He added, “War is war, you can’t predict everything, but we have the will to continue until our victory.”

He  turned on the “non-comrade” Nadezhdin, and warned him, “I again urge you to watch your language.

“To talk about ‘colonial wars’ even in passing is unacceptable in this instance.”