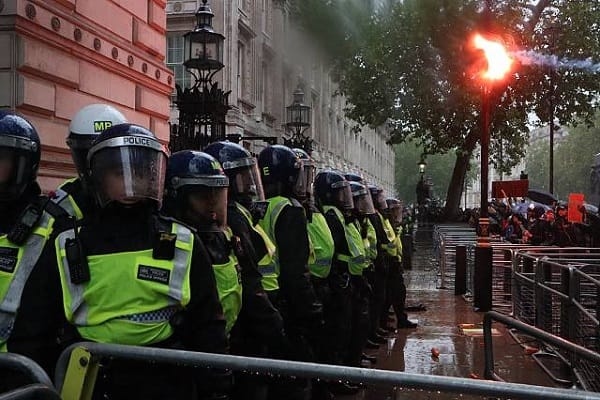 The Metropolitan Police have condemned the Black Lives Matter protests as 35 officers were injured, “including several seriously.”

Furious scenes were seen with hundreds of protestors violently clashing with police in Whitehall, London on Sunday, with bottles, flares and other objects being thrown at police, with some being punched.

Largely the protests were peaceful, there was a minority that wanted to commit violent disorder, criminal damage and set upon police causing harm.

Two police officers required hospital treatment out of the 35 who were assaulted by protestors, with 36 arrests made, thus far.

The Metropolitan Police said in a statement, “A large number of people joined demonstrations that were largely peaceful and left central London after the event.

“However, a number remained in the area around Whitehall and behaved antisocially before becoming violent towards officers.

“Police used a variety of tactics including containment to tackle several violent and antisocial groups before dispersing the final protesters at around 2am on Monday, June 8.

“By the early hours of today 35 officers reported suffering injuries.

“Two of these officers required hospital treatment, one after suffering a head wound and the second with a shoulder injury after a bottle was thrown.”

Tens of thousands of protestors who gathered in London over the weekend have potentially exposed themselves to coronavirus.

Experts have warned the Prime Minister to prepare for a second wave as there will now be a resurgence of coronavirus.

The Mets Commissioner Cressida Dick said, “In recent days a minority of protesters sought confrontation with police leading to many officers being injured, including several seriously.

“When officers sought to protect colleagues and iconic landmarks they faced further obstruction and sustained assault.

“The violent criminality we saw is disgraceful and will have been very frightening for others.

“It will never be acceptable to attack police officers, damage property and leave others in fear of their safety.

“We will be carrying out a thorough investigation so that those responsible for criminal acts are brought speedily to justice.

“Furthermore, those attending mass gatherings risk exposing themselves and others to this deadly virus and I would ask them to find other ways to express their anger and frustration.”

He said that everyone has a responsibility during this crisis to stick to governments advice, and if we all do then the second wave will not be as severe as the first wave, however after the protests over the weekend fears are heightening.

Scientists have now warned there is a high risk of coronavirus spreading across the capital and other parts of the UK, as a result of the George Floyd demonstrations.