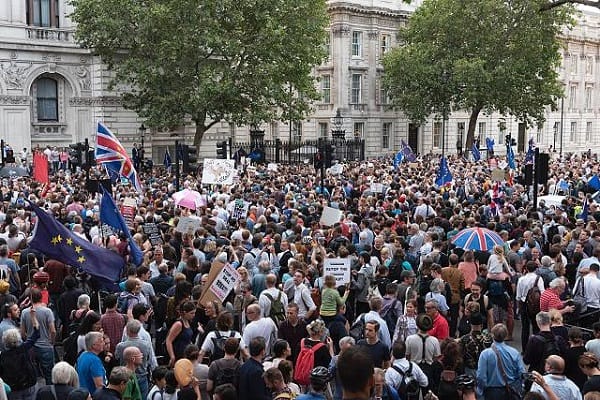 Thousands of people protested on Wednesday evening outside parliament and thousands more protested across the UK over Boris Johnson proroguing of parliament.

Many protestors are calling the suspension of parliament a “coup” and a petition titled “Do no prorogue Parliament” has gained more than 1.3m signatures, meaning parliament will consider this for debate.

The e-petition which can be found on parliament’s website gained more than 500,000 signatures within seven hours and reached a million by midnight.

The prime minister said he wanted to suspend parliament to enable his government to bring forward their new legislative agenda.

Petitioners are arguing that parliament “must not be prorogued or dissolved unless and until the Article 50 period has been sufficiently extended or the UK’s intention to withdraw from the EU has been cancelled.”

Miller told BBC News, that Johnson was “hijacking the Queen’s prerogative power” and the PM is using it for “unscrupulous means.”

She added, “I think that is what so shocking about this, is that its a very cowardly way of using these powers and constitutional convention.

“Our unwritten constitution is a bit like a gentleman’s agreement, and you have to say it’s not been used in that manner.”

Separately pro-Remain barrister Jo Maugham, director of the Good Law Project has filed a motion at the Scottish Court of Session to suspend Johnson’s request that parliament be prorogued.

Former Conservative prime minister Sir John Major has said he is also seeking advice over the legality of parliament being suspended.