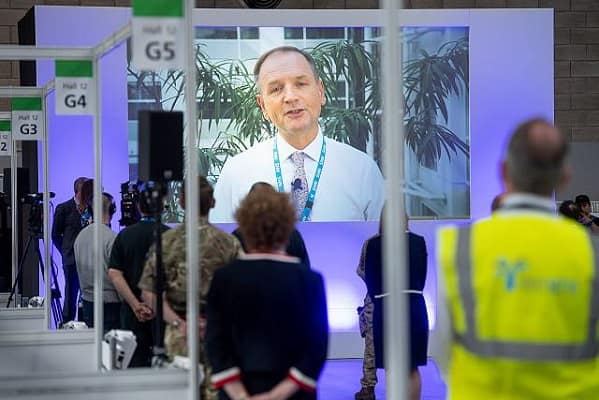 Health chiefs are preparing for a second coronavirus wave later this year with a resurgence of infected people.

Sir Simon Stevens the chief executive for the NHS said on Sunday the “biggest ever” flu vaccination will be required to help keep hospitals running.

Sir Simon said a “very rigorous” test and trace programme will be needed by the time the second wave hits later this year.

Experts have given stark warnings that many more people will catch coronavirus and, regular localised outbreaks of the virus are unavoidable, as the pandemic is “far from over.”

Despite coronavirus being at its lowest level after four months, around 3,600 are catching the virus daily.

Sir Simon who was speaking to the BBC’s Andrew Marr show on Sunday said, “yes” they are preparing for a second wave.

He told Marr, “It is entirely possible that there will be [second wave] and “particularly if it is coexistent with flu.

“The risk is that many of the symptoms are interchangeable so one of the things that we clearly need is a very rigorous testing and tracing service available, the ability to give early warnings to hospitals where there are those local increases, and I think we’re going to need the biggest ever flu immunisation season we’ve ever had.

“We don’t know yet whether there will be a Covid vaccine available in time for winter.”

He admitted that the NHS were expecting around 2m people being hospitalised with the virus in March, with 660,000 feared to have been in intensive care.

Sir Simon said, “In March we were looking at what was happening in Northern Italy, we were being advised by the epidemiologists and public health experts, and we could see as many as 2m people requiring hospital care of whom perhaps a third might require intensive care.

“So yes, there was considerable concern.

“If you think about the actions that had to be taken to free up hospital capacity so that in a few short weeks we were able to successfully look after 100,000 coronavirus patients who needed specialist emergency care, that was something that was not inevitable.”

Sixteen leading surgeons, doctors, psychiatrists, scientists, nurses, along with other medical professionals and the editors of Britain’s best medical journals wrote a letter to government officials.

“While the future shape of the pandemic in the UK is hard to predict, the available evidence indicates that local flare-ups are increasingly likely and a second wave a real risk.

“Many elements of the infrastructure needed to contain the virus are beginning to be put in place, but substantial challenges remain.

“The job now is not only to deal urgently with the wide-ranging impacts of the first phase of the pandemic, but to ensure that the country is adequately prepared to contain a second phase.”

The Scientific Advisory Group for Emergencies (SAGE) who advise the government have warned that in parts of London the R rate stands between 0.8 and 1.1.

SAGE stated in their report, that the regional fluctuations were “not considered to be significant due to the small size of the changes.”

The report added, “The most likely explanation for these changes is the uncertainty created when estimating these values based on increasingly smaller numbers of cases.”

The growth rate in London rose from between -6% and 0% to between -4% and +2%, this data suggests that the rate of spread of coronavirus is growing across the capital.

Sir Patrick Vallance, the chief government scientific adviser further warned over the dangers of “superspreading” the virus in pubs and other venues as they reopened on the 4 July.