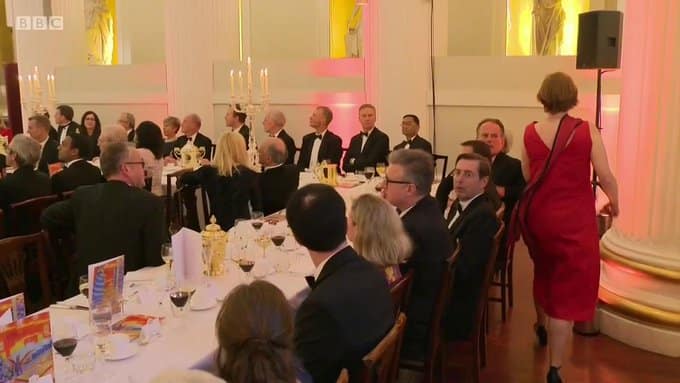 Mark Field MP a Foreign Office minister has been suspended after he was filmed forcefully and disproportionally grabbed a female protestor by her neck.

“The police have said they are looking into reports over this matter and Mark Field has also referred himself to both the Cabinet Office and the Conservative Party.

“He will be suspended as a minister while investigations take place.”

Instead of assaulting peaceful women protesters, @MarkFieldUK would be better off spending his time tackling the #ClimateEmergency. https://t.co/ribmL0w7OE

The women can be seen walking past Mark Field MP, he stood up pushed her against a pillar then he grabbed her neck and forcefully marched her out of the black-tie event.

The black-tie event at Mansion House had a few hundred bankers, to include Mark Carney the governor of the Bank of England, and ministers whilst Philip Hammond was giving a speech.

City of London Police said that they are looking into a “small number” of third-party reports of assault on the woman by Field.

Field has “unreservedly” apologised for his actions to the protester and he referred himself to the Cabinet Office for investigation.

Field said in a statement, “A major security breach occurred at the dinner I attended last night when a large number of protesters suddenly and noisily stormed into Mansion House.

“In the confusion many guests understandably felt threatened and when one protester rushed past me towards the top table I instinctively reacted.

“There was no security present and I was for a split-second genuinely worried she might have been armed.

“As a result I grasped the intruder firmly in order to remove her from the room as swiftly as possible.

“I deeply regret this episode and unreservedly apologise to the lady concerned for grabbing her but in the current climate I felt the need to act decisively to close down the threat to the safety of those present.

“In view of the publicity around this incident I am referring myself to the Cabinet Office to examine whether there has been a breach of the ministerial code, and will of course co-operate fully with their investigation.”

Rebecca Newsom of Greenpeace said, “I don’t see any justification for the kind of violent behaviour we saw from him last night.

“It’s extremely shocking and concerning state of affairs. I think the Conservative Party and he personally need to look hard into this and actually review whether that kind of behaviour is appropriate for anyone let alone somebody in public office.”

Mayor of London Sadiq Khan tweeted, “It is truly shocking to see this kind of behaviour from an MP.

“Violence against women is endemic in our society and this behaviour is unacceptable.

“He should consider his position.”

Theresa May in a stinging attack against Boris for ‘abandoning...