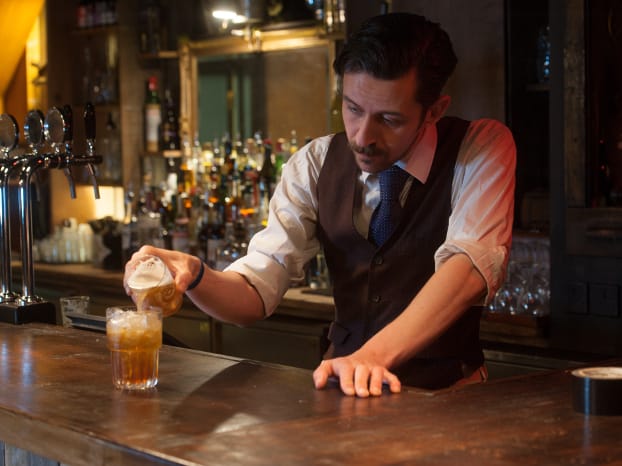 I absolutely refuse to drink beer cocktails. Er, apart from these astonishing creations

Long time readers of this column will have gathered by now that I’m quite fond of beer.

I love strong sipping beers as well as session beers.

And while many people in my position may be snobby about mass-produced beers, and some readers automatically assume I hate lager, there’s space in my heart (and my stomach) for some of the more carefully made mainstream pilsners as well as the obscure rum-barrel-aged wild yeast double IPA brewed with rare New Zealand hops and a sprinkle of eleven waybread.

But there are two places I will not go in beer. OK, three. In reverse order.

In third place, I’ll tend to refuse – but will drink under pressure – the majority of Belgian style lambic beers. This marks me out as a wuss among the beer cognoscenti, many of whom, not without justification, declare these to be the finest beers on the planet. They just don’t appeal to my palate, OK? Like the music of Queen or the writings of James Joyce, I can appreciate the undeniable talent, they just don’t float my boat.

Second, I won’t drink nastily produced industrial gunk that tastes so bad even those people who ‘like’ it will only drink it so cold there is no discernible flavour, or with a shot of lime or wedge of citrus fruit jammed in the mouth of the clear, sunstruck bottle. I’m overweight and I drink too much. Life is already too short without consuming alcohol units that bring no sensory pleasure with them.

But in first place, where I absolutely draw the line, is the beer cocktail.

I always maintain that beer can be just as good, just as sophisticated, as any other drink in any situation. It’s versatility means it goes with food at least as well as wine does. It’s an infinitely superior match for cheese. Choose the right style, and it can substitute perfectly well for champagne, aperitif and digestif.

I’m not even sure beer cocktails really exist in the commonly understood sense. I have a growing collection of cocktail books that all have a section (the shortest in the book, mind) on beer recipes. And when you turn to them, they include things like shandy and lager and lime. I mean, whatever you think of these as refreshing summertime drinks, it’s hardly cutting edge mixology at London Cocktail Club is it?

And then there are those beer and spirit mixes whose very names make you feel like throwing up: the Depth Charges and Boilermakers. The more they try, the more they prove beer should be left alone, a cool and infinitely welcoming alternative to the cocktail bar.

“It sounds like it would make even a thirsty Glaswegian street drinker think twice, but in fact tastes as posh and alluring as Joanna Lumley reading Anaïs Nin”

So beer doesn’t work in your fancy cocktails? Fine, we never wanted to be in your stupid cocktail bar anyway. See you down the pub. Once you’ve had a word with yourself.

At least, that’s what I thought until a couple of weeks ago, and the night my palate sat up and said, “You know what? You’ve just never listened to Queen properly.”

Or at least, it would have done if it were my sense of hearing. And it was a separate, sentient entity that could speak.

I was in the newly opened Brew Dog bar in Shoreditch, enjoying a drink with friends, when we were invited to go downstairs. We reached a small stairwell with nothing interesting in it and the thought fleetingly crossed my mind that I might have written something that upset someone, that perhaps, say, Westminster Council had taken out a hit on me and this was going to be it.

But no, the manager appeared and did something funny to the wall, and it opened to reveal a whole other bar – a speakeasy no less, hidden behind a fake wall!

Brew Dog divides opinion like no other brewer. They are brash and loud and often upset people. Sometimes their PR stunts are a little silly, and sometimes their beers are over the top. Other times they make excellent points, and beers that are among the best in the world.

Approach them with an open mind and you can never be sure what you’re going to get.

They’re not of course.

Brew Dog’s secret is that they simply hire people who are very good at what they do. When they decided to do cocktails, they didn’t sit around experimenting with their beers; they hired a very talented mixologist and said, ‘Here’s a new toy box for you to play with.’

Mixmaster Roy is some kind of flavour wizard. Some creations use beer as a straightforward ingredient, such as Hot Dawg, a mix of Bourbon, spices, honey, and the classic 5am Saint ale.

In others, Brew Dog beers are reduced, or alchemized into Vermouth or syrup. Boil Your Maker comes in a choice of ‘floral’, ‘rich’ or ‘bittersweet’ variants, using a vermouth of the beers Dead Pony, 5am Saint and Hardcore IPA respectively.

The Cream Porter Float looks like a half of Guinness and tastes like dessert might do in Tim Burton’s feverish dreams. Alice Porter infused with rum and homemade raspberry syrup makes up the dark body, with a cream, porter and nutmeg float providing the iconic head.

But the star of the night – at least according to my wife, the Beer Widow – was the Snakebiterita. 77 lager agave syrup blended with Cointreau, freshly squeezed lemon juice and cider brandy create a drink that sounds like it would make even a thirsty Glaswegian street drinker think twice, but in fact tastes as posh and alluring as Joanna Lumley reading Anaïs Nin.

It would have been so easy to create something awful, or even something passable that left you feeling ‘that was a good cocktail, but it would have been better without beer being somehow shoehorned in’, or ‘Fine, but why did you have to ruin a perfectly good beer by mixing it up with other stuff?’

Instead, these are wonderful beer cocktails where beer is the star, doing something that other ingredients couldn’t do, and pushing beer into new areas all over again.

Apparently they were queuing up the stairs to get into Underdog last weekend.

It’s worth the wait.