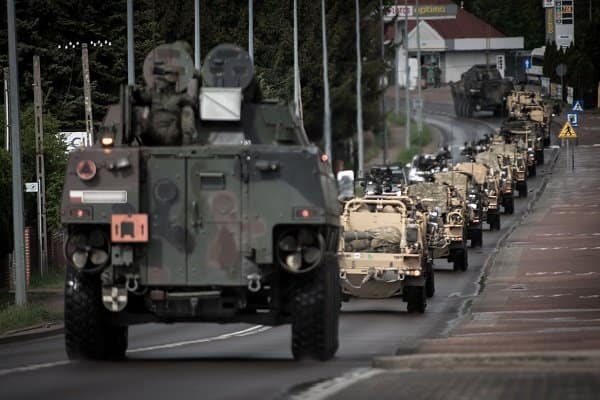 Europe has been warned that the Ukraine is a starting point for Moscow to capture other “European states” and “military aggression against a NATO country can no longer be excluded.”

The Ukrainian President Volodymyr Zelensky is asking Western countries for security guarantees even though the country is not currently part of NATO.

He further warned that there are “gray zones” within Europe’s security making it very easy for Russia to send troops to Ukraine.

Zelensky said on Tuesday, “We need a system of security guarantees, which would be effective even while we are not part of the alliance.

“Russia views the territory of our country as a foothold for capturing other European states. Which means, to ensure the security of Ukraine is to provide long-term security for the whole of Europe.”

The British Defence Secretary Ben Wallace has also warned that there is a “very real danger” Vladimir Putin could end up “lashing out” at other European countries and added that Russia is “the most direct and pressing threat to Europe.”

NATO are preparing for the “worst case scenario” as there strong fears that Moscow’s “military aggression can no longer be excluded” in mainland Europe.

Iceland’s Foreign Minister Thordis Gylfadottir, told the “northern group” of 12 nations in Reykjavik, that they must prepare for the “worst-case scenario” over the threat of Russia escalating the war into Europe.

Iceland’s Foreign Minister added, “The threat of a direct military aggression against a NATO country can no longer be excluded.”

Wallace said whilst visiting Iceland, warned that mainland Europe should be “deeply wary” of Putin’s intentions and the Russian leader does not consider Lithuania, Latvia and Estonia to be countries in their own right and there is a risk he could try to invade them.

“Whether he would be silly or foolish enough to do that in an overt manner with a cruise missile remains to be seen but he would be dealing then with NATO.”

Last month NATO forces were placed on “high readiness” over fears that Putin is planning a further invasion and the Secretary General Jens Stoltenberg has dramatically said they are to increase their forces to “well over 300,000.”

This is their largest overhaul of their defences since the Cold War by significantly increasing troop numbers from 40,000 to more than “300,000” in Europe.

The expansion of NATO’s forces will mainly be in countries which are the closest to Russia and later this week in a landmark summit Stoltenberg will outline the new decisions.

In a briefing at NATO headquarters in Brussels, Stoltenberg said, Together, this constitutes the biggest overhaul of our collective deterrence and defence since the Cold War.”

The NATO chief added, “We will transform the NATO response force and increase the number of our high readiness forces to well over 300,000,” whilst Sky News reported that this will be called the Allied Reaction Force (ARF).”