Home Lifestyle NewsArt & Culture News Wondering what those “jogging” signs all over London are for? Meet the new Boris Spikes scheme 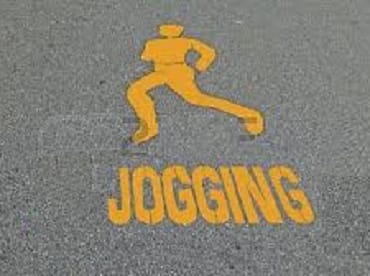 Wondering what those “jogging” signs all over London are for? Meet the new Boris Spikes scheme

You’ve probably noticed the yellow “jogging” signs that have been appearing on roads and pavements in and around central London over the past couple of weeks.

LondonlovesBusiness.com can now exclusively reveal that they are part of Mayor of London Boris Johnson’s major new project: Boris Spikes.

Boris Spikes – referring to the spiked running shoe for sprinters known as “spikes” – is an initiative to encourage more Londoners to get jogging.

A source at the mayor’s office tells us the hope is to improve Londoners’ health, decongest the roads and ease the burden on our public transport system.

From May, a network of dedicated jogging lanes on London roads and pavements will open to London joggers. The lanes will initially be found just in the centre of the capital, but the wider plan is to roll Boris Spikes out as far as zone 6 over the next 18 months, a source at the mayor’s office tells us.

Every 1.5 miles along the jogging lanes there will be roadside vending machines that will dispense jogging shoes for rent, offering running spikes and non-spiked trainers from sizes 3-13, provided by a major sports brand, yet to be announced.

There will also be a “used” bin for joggers who have come to the end of their journey to drop off used running spikes. These will then go through an industrial washing process before next use.

Our source tells us the trainer sizes may be extended up to size 16 or even 18 if enough very tall people demonstrate interest in the scheme and are seen jogging regularly.

The sizes due to be offered to date have been identified by monitoring joggers’ footprints after rainy days in Hyde Park, Green Park, Brockwell Park and Regents’ Park over the past six months, in pioneering research conducted by the Institute of Podiatrists, commissioned by TfL.

Avril Fuhl, director of the Institute of Podiatrists, which has worked closely with TfL and the major sporting brand to develop a trainer that will be suitable for all feet, says: “This is an immensely exciting development in the world of London health – and indeed the world of London feet.

“We have been working hard with our partners TfL to develop a shoe that supports jogging at a range of speeds, from sprinting to lazy. We are very proud of the final shoe, which we believe will support all running needs – and perhaps even power-walking.”

TfL appointed Pullynia Legge, a graduate of Central St Martin’s Shoe Design MA, to design the exterior of the running shoe. Legge tells us: “I was honoured to design the new Boris Spike. It has been highly rewarding and, I must admit, gruellingly challenging.

“Yet, having battled through many long nights and resultant lie-ins ahead of starting work day after day, I believe the final trainer subtly complements a wide range of common outfits in London, from the charcoal grey three-piece suit of the City to the ironic 90s baggy trousers of Dalston. It has been quite the design challenge to meet the trainer aesthetic of as many of Londoners as possible, but one I have relished.

“I hope many of your readers feel equally comfortable slipping on the Boris Spike and jogging across the capital, whether their end destination happens to be a board meeting or a mid-morning gin and tonic – or both simultaneously.”

Follow me @sophiehobson and @LondonlovesBiz and try our free newsletter