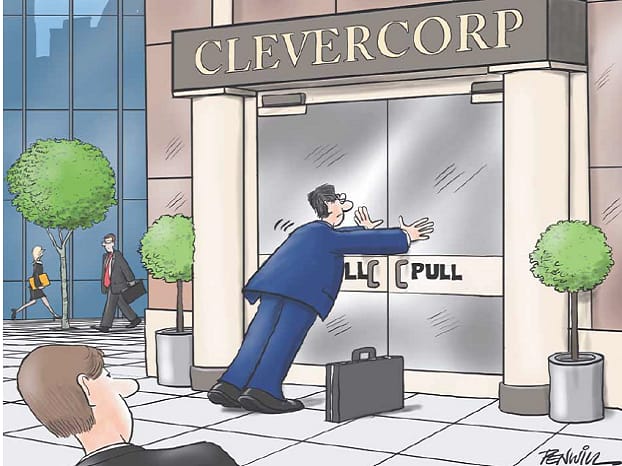 We're with Stupid: Why the smartest employees make the dumbest mistakes

Why common sense is still uncommon in corporate firms

Source: Illustration by Roger Penwill (with apologies to Gary Larson)

Albert Einstein is best known as the absent-minded genius who gave us the theory of relativity, but he also developed a more humorous hypothesis of human foibles: “Only two things are infinite,” he concluded, “the universe and human stupidity… and I’m not sure about the former.”

Stupidity chimes with many anecdotal reports of corporate life, from Henry Ford’s refusal to listen to minions who said he should update the Model T, to Coca-Cola’s blundering launch and subsequent withdrawal of New Coke in 1985.

And organisational cultures that unintentionally encourage stupidity may have contributed to the current financial crisis, according to André Spicer, Professor of Organisational Behaviour at Cass, and Mats Alvesson, Professor of Business Administration at Lund University in Sweden, whose theory of  “functional stupidity” aims to explain how intelligent and knowledgeable employees often leave logic at the office door.

A Stupidity-Based Theory of Organizations, their new paper for the Journal of Management Studies, suggests organisations that make a virtue out of the cleverness of their staff and sell intangible services – accountancy firms, consultancies, banks – are particularly prone to stupidity, assuming that their intelligent staff act logically yet at the same time incentivising rash behaviour based on intuition rather than deliberation.

Spicer and Alvesson have spent years studying knowledge-intensive workplaces: research and development labs, management consultancies and even schools, where the nuts and bolts of what key employees handle is knowledge.

“The mantra of the 90s was, if you want to be competitive, work out what your unique knowledge is and harness it,” says Spicer. He points to the weighty body of research on organisational knowledge, information, competence, wisdom, resources, capabilities, talent and learning that has emerged in recent decades. “Once inside organisations we discovered that, yes, there were lots of very smart, intelligent people with degrees and PhDs from top universities, but when we looked at how they behaved and used that intelligence day-to-day, it seemed to be highly limited. They were either using intelligence in myopic ways, or doing things that were downright stupid and didn’t make much sense. And when they stood back and looked at it, they admitted that this was the case.”

Spicer and Alvesson came across management consulting firms, for example, which would recruit top university graduates, only to have them spend their first few years inputting data to Excel spreadsheets and PowerPoint slides.

The financial crisis prompted them to take a closer look at whether evidence and literature pointed to some kind of organisational stupidity at play.

“When we were interviewing people inside some of these organisations, many would say, ‘This is just stupid’,” recalls Spicer. “We disregarded it at first as just a sign of exasperation, but as we did some additional reading around the topic, we realised there was quite a history of philosophers trying to figure out why humans are often determined by their stupidity.”

Non-rational or irrational decision-making in organisations has fascinated Nobel prizewinners for decades, from Herbert Simon’s theory of bounded rationality (the rationality of individuals is limited by the information they have, the cognitive limitations of their minds and the finite amount of time they have to make a decision) to Daniel Kahneman’s discovery that when we process information, our brains interchange between two different systems: deliberative processing and intuition, our default position in daily life.

But Spicer and Alvesson believe these works miss a set of deviations from smartness, which are neither semi-rational nor purely stupid. Functional stupidity in organisations, they reckon, is demonstrated by the absence of three processes: reflexivity, justification and substantive reasoning,

Lack of reflexivity means an inability or unwillingness by employees within an organisation to question its dominant beliefs, norms and expectations. For instance, employees may not consider or question organisational morality because “what is right in the corporation is what the guy above you wants from you”. And this suppresses an employee’s capacity to use reason.

Lack of justification entails employees neither demanding nor providing reasons and explanations. This allows practices to be accepted without any significant critical scrutiny. For example, organisations will often adopt new practices with few robust reasons beyond the fact that they make the company  “look good” or that “competitors are doing it”. The final warning sign of functional stupidity, a lack of substantive reasoning, happens when the focus is on achieving a given end, while ignoring the broader substantive questions about what that end actually is. For instance, an accounting firm may compress a broad range of issues into recordable numbers, but ignore many of the more substantive debates around what those numbers represent and the moral implications associated with using them in decision-making.

This is a form of stupidity, say Spicer and Alvesson, because it halts reasoned investigation and consideration of the implications of actions.

“Our argument is that stupidity is different from irrationality,” says Spicer. “Irrationality is an outcome, but stupidity is a process.” There are several steps, say Spicer and Alvesson, that organisations can take to escape the functional stupidity trap. In knowledge intensive workplaces, for example, organisations can be more specific about desired outcomes, and give employees greater responsibility for and ownership of outcomes. “Think of architects who used to work with physical models, but now do almost everything by computers,” says Spicer.

“Organisations should redesign their processes to bring back tangibility to the work being done.” Secondly, Spicer and Alvesson say organisations must encourage employees to step back and ask reflexive questions, allow for devil’s advocates and remove taboos (and threat of punishment) from the airing of criticism. They argue that corporate strategy must move beyond meaningless mission statements. “If organisations were more honest about the substantive work they do, and that was reflected in the goals they set, that would help give more substantiveness back to the workplace,” says Spicer.

And finally, the two academics make a plea for organisations to value expertise once again. “What strikes me when I examine many of the grand failures of the last few years is that financial market experts were marginalised and discouraged from giving their opinions,” says Spicer. “There has been a degradation of professionalism in many organisations, with professional knowledge being used in only the most narrow of ways.”

He points to research by Dr Amanda Goodall, a Senior Lecturer in Management at Cass, whose study showed that Formula 1 team bosses who started out as drivers or mechanics won twice as many races as their rivals. “Or consider what makes Michelin three-star restaurants maintain excellence over long period of time – it’s the chefs who started right at the bottom, cleaning the pots and pans.”

Leaders who know – really know – how their organisations create value will be less likely to lead their employees into functional stupidity, say Spicer and Alvesson.

Ian Wylie is a freelance journalist. He can be contacted at [email protected]

An uphill struggle: do our execs need to spend more time in the saddle?

Graeme Yell: Why Google doesn’t have all the answers