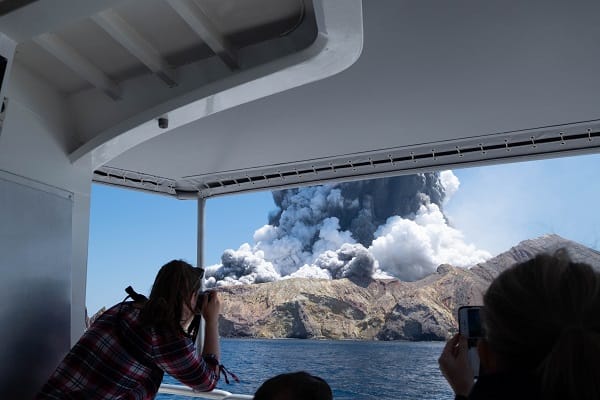 New Zealand police have said five people have been killed after a volcano erupted on White Island with many people missing.

My god, White Island volcano in New Zealand erupted today for first time since 2001. My family and I had gotten off it 20 minutes before, were waiting at our boat about to leave when we saw it. Boat ride home tending to people our boat rescued was indescribable. #whiteisland pic.twitter.com/QJwWi12Tvt

On Monday the volcano erupted with an enormous plume of ash and steam whilst many tourists were on the island.

Those are some of the people put boat picked up. Praying for them and their recovery. Woman my mom tended to was in critical condition but seemed strong by the end.

The helicopters on the island looked destroyed: pic.twitter.com/jds5QBD1yg

Michael Schade, a tourist from San Francisco made it off the island moments before the volcano erupted.

He said, “This is so hard to believe. Our whole tour group were literally standing at the edge of the main crater not 30 minutes before.”

Kevin O’Sullivan, chief executive of the New Zealand Cruise Association said, “We believe there is a tour party from Ovation of the Seas involved in the White Island eruption. We have no further details at the moment.”

Royal Caribbean Cruises representative said in an emailed statement, “We can confirm that a number of our guests were touring the island today.

“We do not have any additional details to share at this time.”

Volcanologists said the ash plume shot 12,000 feet (3,658 m) into the air and that eruptions from the volcano on White Island can happen at any time.

Shane Cronin, a volcanologist at University of Auckland, said in comments published by the Australia Science Media Centre, “Sudden, unheralded eruptions from volcanoes such as White Island can be expected at any time.”

He added, “We know hydrothermal and so-called ‘phreatic’ eruptions can occur suddenly and with little or no warning because they are driven by the expansion of super-heated water into steam.”

Prime minister Jacinda Ardern told a news conference, “We know that there were a number of tourists on or around the island at the time, both New Zealanders and visitors from overseas.

“I know there will be a huge amount of concern and anxiety for those who had loved ones on or around the island at the time. I can assure them that police are doing everything they can.”