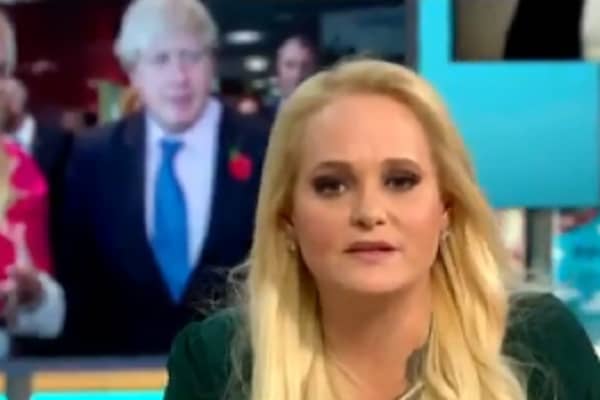 Jennifer Arcuri who has continually refused to answer questions over her relationship with Boris Johnson was slammed by Lorraine Kelly live on the Good Morning Britain (GMB) programme.

Kelly asked Arcuri live on air “what’s the point of you coming on TV?” after the American businesswoman appeared to swerve questions.

Appearing on GMB Arcuri dodged questions asked by the show’s hosts, Piers Morgan and Susanna Reid, Arcuri said does not want to “be pressured into admitting” to anything over her links with Johnson.

Lorraine had a few words for Jennifer Arcuri…👀@lorraine | #GMB pic.twitter.com/dyPqIleISQ

In a link up after the interview Kelly said to the GMB hosts, “That was crazy wasn’t it? What’s the point, coming on and not answering any questions?”

Morgan asked Arcuri if she has a response to Kelly, then the question was repeated back to her, “It just doesn’t make any sense. What’s the point in you coming on and not saying anything?”

The question was repeated, “What is the point of you coming on TV to clear the air and then you don’t say anything?”

Arcuri replied, “I believe I said a few things. What is it that you’re looking for that I should say?”

Kelly responded with, “You didn’t answer any of the questions that were put to you, and I just don’t see the point of you coming on to be honest.”

When asked by the host’s of GMB if she had an “affair” with Johnson, as Arcuri used that word in the ITV documentary.

She said, “I’m not going to answer that question, but as you can tell, there was a very special relationship there.

“When it did come out, half the people already assumed the affair and told me to admit it. The other half wanted me to deny, deny, deny.”

Arcuri has been at the centre of controversy over her relationship with the prime minister. On Sunday in an interview with ITV Exposure the US businesswoman said she wished that had declared her relationship with Johnson as potential conflict on interest to help avoid the “humiliation” she has suffered.

She has also said she feels “heartbroken” and claimed the prime minister who she has known for ten years feels she has been cast aside like a “gremlin” as she asked Johnson for his advice on how to handle the media attention.

Earlier this year Arcuri came into the lime light over allegations she received favourable treatment over he business ventures, whilst Johnson was the mayor of London.