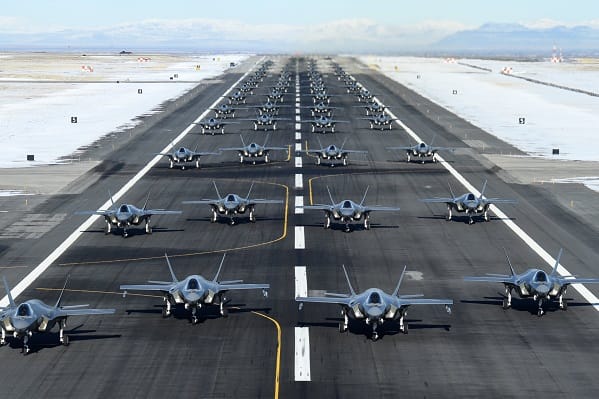 In a display of showing strength the US Air Force showed off a display of 52 F-35As fighter jets after Iran has threatened “severe revenge” and respond “proportionately” after the assassination of their top general.

US Air Force R. Nial BradshawThe US Air Force shared a series of photos of the 388th Fighter Wing who are based in Utah on a planned exercise on Tuesday. The F-35As are worth around $89.2m each and combining all 52 fighter jets the total cost is around $4.2bn.

US Air Force R. Nial Bradshaw”The exercise, which was planned for months, demonstrated their ability to employ a large force of F-35As testing readiness in the areas of personnel accountability, aircraft generation, ground operations, flight operations, and combat capability against air and ground targets.

WATCH: 52 F-35s launched in rapid succession from @HAFB today! @388fw & @419fw conducted a combat power exercise part of normal, scheduled training operations and not a response to any current events.

The fighter wings are home to 78 aircraft.