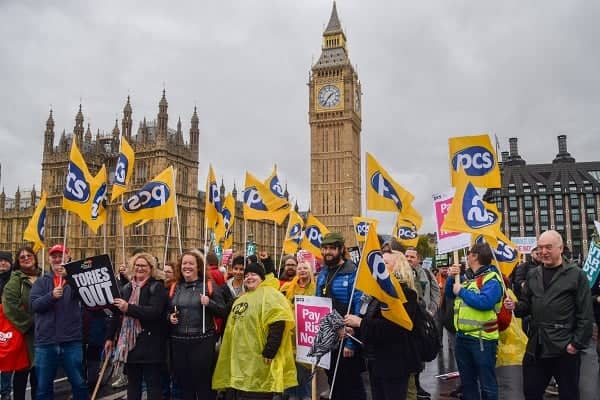 Unions who represent civil service workers blasted the government as talks were called a “complete farce” following a meeting between the PCS and the FDA with Cabinet Office Minister Jeremy Quinn.

The Public and commercial Services union (PCS) announced on Wednesday evening that around 100,000 civil servants will go on strike on 1 February.

On Thursday morning Mark Serwotka, the general secretary of the PCS, said, “I’m sad to say the meeting was a complete farce” after Quinn said that there “is no money on the table.”

Serwotka said this is “a lie,” as the government can create money as a matter of “political priority.”

He added, “We will not stand by and watch our members be condemned to low pay. We’ve tried talking but it appears the only option open to us is to force them to change their mind, and the only way we can do that is to escalate our strike action.”

Dave Penman, the head of the FDA, said, “Our meeting this morning with Jeremy Quin, minister for the Cabinet Office, over pay was as ever cordial, but as has been the case up till now, it lacked anything concrete from the government to address the issues we’ve been raising with ministers, employers and review bodies.”

A Cabinet Office spokesperson said the meeting “forms part of the government’s commitment to engaging with unions across the board”.

“We regret the PCS decision to call further strike action, but discussions will continue, and we have comprehensive plans in place to keep essential services running and to minimise disruption.”