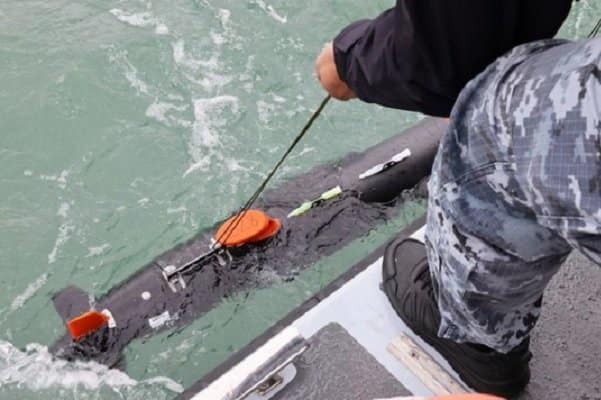 The British Ministry of Defence (MoD) has “already begun” to train the Ukrainian Navy to use “underwater drones” to “locate and identify mines.”

The “lightweight autonomous vehicle” uses an array of sensors which will enable the Ukrainian Navy to seek, locate and destroy the sea mines.

The MoD said, “The UK is giving six underwater drones to Ukraine and training their personnel to use them to clear their coast of mines.

“The autonomous vehicles can detect, locate and identify mines using an array of sensors so the Ukrainian Navy can destroy them.

“The lightweight autonomous vehicle is designed for use in shallow coastal environments, operating effectively at depths of up to 100 meters to detect, locate and identify mines using an array of sensors so the Ukrainian Navy can destroy them.

“Dozens of Ukrainian Navy personnel will be taught to use the drones over the coming months, with the first tranche having already begun their training.”

“This vital equipment and training will help Ukraine make their waters safe, helping to smooth the flow of grain to the rest of the world and supporting the Armed Forces of Ukraine as they look to defend their coastline and ports,” he added.

Admiral Sir Ben Key, First Sea Lord and Chief of the Naval Staff, said, “Through the expert skills being taught here, our Ukrainian allies will be able to clear their own waters of mines.

“These weapons target shipping indiscriminately, but particularly affect civilian traffic and trade and have had a devastating impact on freedom of navigation in the Black Sea.

“This training is another powerful demonstration of the UK’s ongoing commitment to Ukraine in their fight to defend their country and repel Russian aggression.”