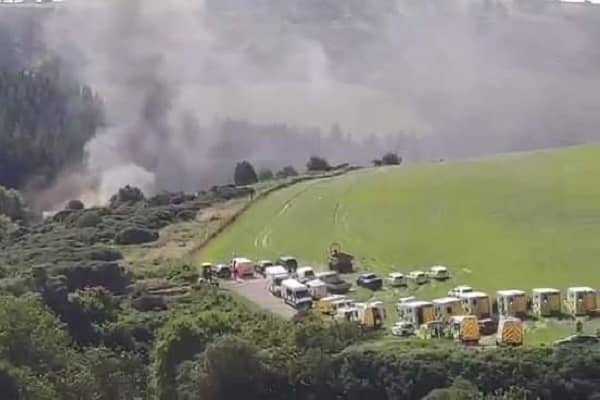 The Queen sends ‘thoughts’ after three killed in train derailment

Following the train derailment near Stonehaven, Aberdeenshire the Queen has spoken of her “great sadness” after three people were killed.

At least six people have been injured which is believed to have been caused by a landslip after heavy rain flooding in the area.

Footage showed on Wednesday smoke billowing from the scene after the train burst into flames, which saw dozens of emergency workers and air ambulances at the at the scene.

In a message to the Lord Lieutenant of Kincardineshire on Wednesday evening, the Queen said: “It was with great sadness that I heard of the train derailment earlier today in Stonehaven, Aberdeenshire.

“The Duke of Edinburgh, and entire Royal Family, join me in sending our thoughts and prayers to the families of those who have died and those who have been injured.

“Our thanks go out to the emergency services for their response and dedication.”

The RMT transport union said on Wednesday evening that a train conductor and the driver both died.

RMT senior assistant general secretary Mick Lynch said, “The confirmation that there have been three fatalities in the Stonehaven derailment, including the driver and one of our conductor members, is the most dreadful news and this trade union’s thoughts are with the families, colleagues and friends of those who have lost their lives in this tragedy.”

British Transport Police (BTP) said, “Very sadly despite the best efforts of paramedics, we can confirm that three people have been pronounced dead at the scene,” the force said.

“While formal identification is yet to take place, the driver of the train is very sadly believed to have died. His family have been informed and are being supported by specially trained family liaison officers.

“Officers are continuing to work to inform the families of the other two people who sadly died.

“Six people have been taken to hospital to be treated for injuries, which thankfully are not believed to be serious.”

Scotland’s First Minister Nicola Sturgeon tweeted: “My deepest condolences are with the loved ones of those who lost their lives in this tragic incident.”

Prime Minister Boris Johnson added: “I am saddened to learn of the very serious incident in Aberdeenshire and my thoughts are with all of those affected. My thanks to the emergency services at the scene.”