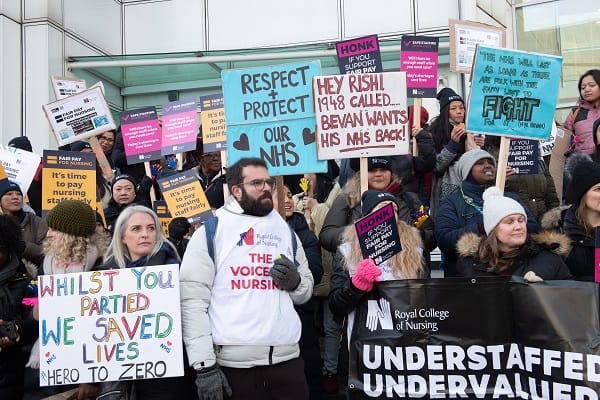 Forty-two per cent of Britons say the NHS is a big issue for Britain, an increase of fifteen percentage points since last month and the highest score since February 2020, immediately before the COVID-19 pandemic.

This month is also the first time the NHS has topped the Issues Index since the February 2020 edition.

Concern about the economy and inflation/prices has fallen, by three and six points respectively. However both remain significant concerns, with over a third of the British public mentioning both the economy (37%) and inflation (36%). They also remain considered as the biggest single issue, with one in five picking each out as the biggest concern for Britain, compared with 15% who say the same about the NHS.

The proportion citing lack of faith in politicians and politics has fallen by seven points since December, with 11% mentioning this as an issue for the country this month. However it remains in the top five issues, tied with housing and pollution/climate change.

Nine per cent mention poverty and inequality as a big worry this month – while it is only a small decrease from the December score of 11%, this is the lowest level of concern recorded in almost a decade: the last time the headline level of worry was nine per cent was July 2013.  Eight percent each mention trade unions/strikes and Europe/Brexit.

While the NHS and healthcare is now the leading issue for Britain there remain significant differences between demographic groups. Concern is higher among those aged over 55 (52%), social grades AB (51%), those living in the south of England (50%) and women (49%). It is significantly lower than average among 18-34 year olds (26%) and Londoners (25%).

There are no differences between supporters of the two main political parties however: 48% of those who feel closer to the Conservative and Labour parties both mention the NHS as a big issue for Britain.

Mike Clemence, a researcher at Ipsos, said, “The new year starts with a new concern at the top of Britons’ minds: the NHS is now the most mentioned important issue facing the country. But this means that there are three big issues in the country right now as the public also remain very worried about the national economy and inflation.

“Outside these three concerns, immigration remains a big focus for a smaller part of the population, followed by housing, the environment and lack of faith in politicians.”