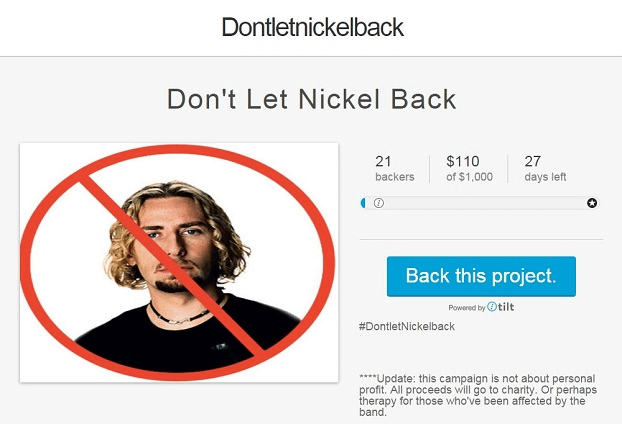 The five funniest and most bonkers crowdfunding campaigns

Seen that kickstarter campaign to keep Nickelback OUT of London?

“Unlistenable music” has just made someone start a crowdfunding campaign titled “Don’tletNickelback” – talk about hating things with a passion.

His explanation? “With your help, we can ensure that the band do not schedule any gigs here, do not attempt to come here – nor even phone here.”

“Just imagine, thousands – perhaps tens of thousands of music lovers – all not witnessing an exclusive concert by Nickelback in London. It will be glorious. Legendary. Dare we say, game-changing?”

Think this crowdfunding campaign is bonkers? Sample these:

The man who took upon himself this mash-ive task is “Zack Danger Brown”. Why should you invest? To get a “thank you” on his website and get your names said out loud while making the potato salad.

You Doctor Who fans do the darndest things. To celebrate its 50th anniversary last year, Doctor Who fandom reached stratospheric levels after a campaign to put a Tardis into orbit raised $88,880 from over 3,000 backers.

Bestival goers said “hello” to a giant inflatable sculpture of Lionel Richie’s head last year. All thanks to a kickstarter campaign by Bestival founders Josie and Rob da Bank who raised £8,000 from over 200 backers.

The campaign managers said: “We started this ambitious and frankly odd public art project almost a year ago. Inspired by internet pop culture our goal was to make an installation that people could interact and talk with.”

A cat café in London called Lady Dinah Cat Emporium raised a meowvellous £109,510. Based in Shoreditch, the luxious café for cats was the first of its kind in the world. This is where you can “enjoy a cuppa with the company of cats”.

A bike that can fly? It’s possible, according to John Foen and Yannick Read’s Kickstarter campaign.

Here’s why you should invest, according to campaign managers:

“When compared with a helicopter, the Hoverbike is cheaper, more rugged and easier to use – and represents a whole new way to fly.  The Hoverbike flies like a quadcopter, and can be flown unmanned or manned, while being a safe – low level aerial workhorse with low on-going maintenance.”

Why are red phone boxes turning green in London?

Who is going to be the next mayor of London? Here are a few pointers…