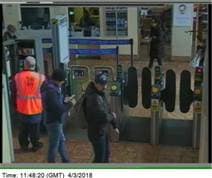 The station guard pictured on CCTV at Salisbury train station inches away from the two Russian suspects named in relation to the attack on Sergei and Yulia Skripal has spoken to ITV News.

Walter Tanner, wearing the orange waistcoat in the picture  told ITV News that seeing the image showing Alexander Petrov and Ruslan Boshirov making their way through the station next to him on March 4 was “unnerving“.

Less than an hour later, the two Russians are believed to have sprayed the nerve agent novichok on the front door of Sergei Skripal’s house, leading to the poisoning of him and his daughter.

Asked how he felt about having been in such close proximity to two men suspected of attempted murder with a chemical weapon, Mr Tanner said: “I don’t really know. I’m blank. They didn’t cause me any trouble. It’s a bit unnerving I suppose, being so close. But I’m okay.”