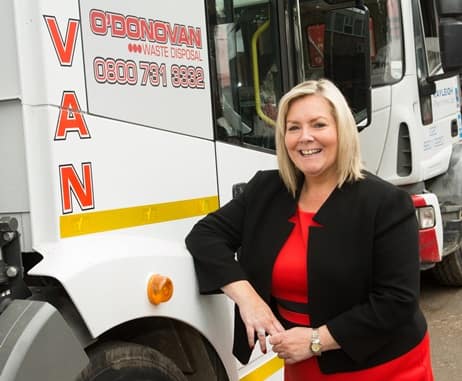 I was disappointed by the Mayor of London, Sadiq Khan last week. Within two years, only lorries with Euro VI engines will be permitted to enter the Ultra-Low Emission Zone (ULEZ) free of charge, exposing those who don’t have these engines to a £100 fee to enter the zone, from 8 April 2019. I’ve spoken before about the misguided decision to accelerate these plans, and the date set by Khan is 17 months earlier than that previously agreed by Boris Johnson.

It is not yet clear whether this “zone” will simply apply to that which covers the congestion charge already, or whether it will apply across the whole of Greater London for diesel HGVs.

At O’Donovan, we’re fortunate to work closely with manufacturers and have the facilities to adopt the very latest technologies to keep our fleets efficient and sustainable. But for smaller independent operators, Khan’s timeframe is far too ambitious.

Euro VI engines, which were only introduced at the end of 2014, are described by TfL as “ultra-low emission” and emit at least 90 per cent less NOx than earlier vehicles; I have even been told that they emit less emissions than a Volkswagen Polo. The average fleet renewal programme is between 7-10 years and at present, there are no plans to introduce Euro VII engines or make any further modifications to existing lorries.

So, I’d like to know what operators are meant to do with vehicles less than five years old. For this reason, expecting every HGV operator to reduce diesel emissions across their entire fleets by 8 April 2019 is extremely misguided. It’s financially impossible for SMEs and the industry needs more time to make further changes and adopt new technologies.

What also staggered me when I first heard the news was that, by imposing the Ultra-Low-Emission-Zone in London, Khan is ignoring the fundamental importance of HGVs to the city to deliver the 50,000 homes he has promised. It’s just another example of Khan targeting the logistics industry as low hanging fruit; restricted vehicles will be a logistical nightmare and the consumer and taxpayer will end up paying for more expensive homes.

I would like to ask Khan; how does he plan to grow our city without the vital role we play? A much more sensible, informed option would be to change the European tachograph rules which currently restrict the hour’s local hauliers can work. Extending these hours into weekends would cut the number of HGVs on London’s roads during rush hour, reducing emissions and ultimately improving road safety for all.

Khan’s consultation also advised that we must bear The Direct Vision Standard – due to come into force in 2020 – in mind, as this will also play a part in whether fleets are considered fit to operate on London’s roads. To this point, my concern is that Khan is trying to bring in direct vision when the industry is very limited in what we can realistically add to our fleets. The Mercedes-Benz Econic skip loader is the best option available to us at the moment, and for this reason it’s important that manufacturers have the availability to provide operators with suitable designs sooner rather than later. I am the first person to admit that the time between design and launch can be anything from five to seven years, but it’s paramount that manufacturers step up to the plate.