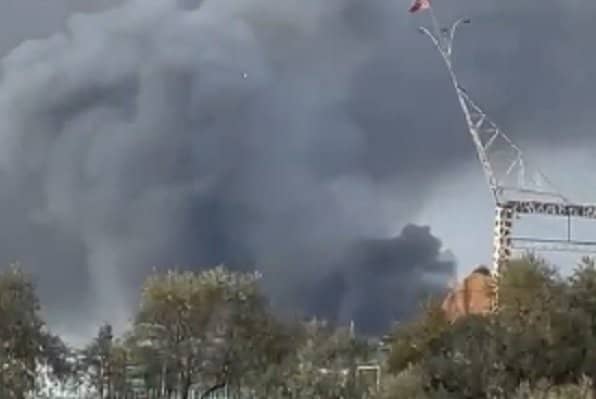 A Russian aircraft exploded on the runway at Belpek airfield in Crimea sending huge plumes of black smoke in the skies of the annexed peninsula.

The aircraft “skidded off the runway” at the Russian airfield caught fire then exploded near to the city of Sevastopol and several explosions were heard spelling “more bad news for Putin.”

The governor said, “Extraordinary situation at the Belbek airfield.

“According to rescuers, the plane skidded off the runway during landing and caught fire. The fire brigade is currently on the scene. Please keep calm”

Christo Grozev, a reporter for Bellingcat wrote on Twitter, “More bad news for Putin today. Something burning at Belbek military airport in Sevastopol.

“Local governor says it’s a military plane that overshot the runway and crashed.”

Oliver Carroll, a reporter for The Economist wrote, “The claim by Russian-appointed Governor of Sevastopol is that a plane overshot the runway.

“If it did, it seems then have run into an arms dump.”

On Saturday Putin suffered a crushing blow after more than 5,000 Russian troops fled after being totally “surrounded” by Ukrainian forces in the strategic town of Lyman.

The spokesman of the Eastern Group Forces, Serhiy Cherevaty said on Saturday morning, Ukrainian forces have successfully “surrounded the Russian grouping in the area of Lyman,” Donetsk region, five settlements near the city have now been “liberated.”

The Russian Defence Ministry announced at around 2:20pm on Saturday, UK time, that all 5,500 troops have now fled the city of Lyman in eastern Ukraine “in connection with the creation of a threat of encirclement.”

The Ministry said, “In connection with the creation of a threat of encirclement, allied troops were withdrawn from the settlement of Krasny Liman to more advantageous lines,” this will be seen as another major loss to Putin.

The number of UK households in fuel poverty will increase to 8.4 million from …