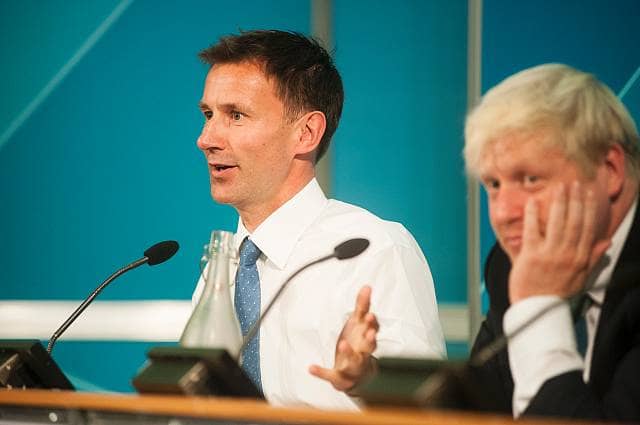 Jeremy Hunt and Boris Johnson have clashed over delivering Brexit, and Hunt hit out at his rival and warned against making “straight jacket” promises to leave by 31 October.

Johnson said in an open letter to Hunt that Britain will leave the UK by 31 October “come what may” and warned that by not leaving on time would be “devastating” for the party and the UK.

Hunt called it a “fake deadline” which could lead to a general election handing power to Jeremy Corbyn and derail Brexit.

Johnson who has a hardened stance guaranteeing Brexit “with or without a deal” gained reaction from Bob Kerslake the former civil servant chief who said the October pledge “a complete hostage to fortune.”

The former Whitehall mandarin told the Chamberlin lecture on Tuesday, “It is always a good maxim in politics not to enter a room unless you know that you can get out of it.

“Boris Johnson has not only entered the room but he has put on the straight jacket, padlocked the door and started the tap running.”

In an interview with the BBC Hunt suggested that Johnson will find it difficult to get a new deal with Brussels.

He said, “The judgment is who is the person we trust as prime minister to go to Brussels and bring back that deal.

“It’s about the personality of our prime minister. If you choose someone where there’s no trust, there’s going to be no negotiation, no deal.”

He added, “I think that 31 October come hell or high water is a fake deadline, because it’s more likely to trip us into a general election before we’ve delivered Brexit, and that would hand the keys to Jeremy Corbyn and then we’d have no Brexit at all.

“I will leave the European Union without a deal. But I’m not going to do that if there’s a prospect of a better deal and if I did it it would be with a heavy heart because businesses up and down the country would face a lot of destruction.”

Tax adviser warn the raid on R&D tax relief for...