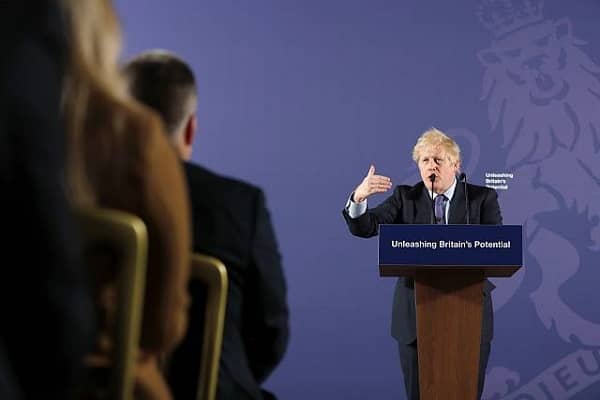 Following two major speeches by the British prime minister and the EU chief negotiator Michael Barnier the pound has fallen by 1% against the US dollar as traders fear a no-deal Brexit could be on the horizon.

Boris Johnson said he will walk away from the proposed year long trade talks if Brussels does not agree to the UK’s demands.

Barnier said on Monday laying out his draft mandate calling for “reciprocal access” for fishing vessels to operate in the UK waters if a free trade agreement is to be signed.

Johnson is on a collision course with Brussels as he insisted there is “no need” to abide by the EU’s rules and made it clear, British fishing grounds are “first and foremost” for British fishing vessels only.

Speaking at a conference in Greenwich on Monday Johnson said, “There is no need for a free trade agreement to involve accepting EU rules on competition policies, subsidies, social protection, the environment or anything similar, any more than the EU should be obliged to accept UK rules.”

“The UK will maintain the highest standards in these areas, better in many respects than those of the EU, without the compulsion of a treaty.”

Ranko Berich, head of market analysis at Monex Europe said, “Today’s sterling price action has a feel of groundhog day; signs of tension in EU-UK trade negotiations have caused the pound to drop some 1% today.

“But on the whole, although Barnier and Johnson have indeed set out markedly different visions for trade relations, the UK prime minister was careful not to emphasise any of the sort of red lines that sunk his predecessor’s negotiations with the EU.”

“No deal is not the base case by any means but the EU and UK look in very different places right now at the start of talks.

“It’s going to be a very long and rocky road to get there and the shape of the deal will hinge on some important concessions on both sides.

“The British government has come out swinging over the weekend with plenty of fighting talk, but they’re up against a tough opponent.”