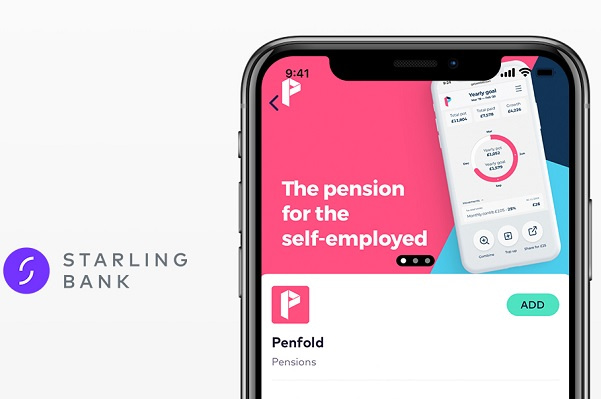 Pension solutions for the self-employed

Starling, the leading digital bank, have introduced Penfold to its Marketplace, bringing to self-employed people pensions they can set up, manage and track online or on their phone.

Penfold offers pensions that take only minutes to set up online. It has been designed for freelancers, self-employed people and limited company directors, whose incomes can sometimes fluctuate widely from one month to the next.

It also aims to encourage more pension planning. Less than a quarter of the nation’s five million self-employed people currently contribute to a pension, according to government data, with half saying they are not confident about how they will fund their retirement.

Penfold joins the Starling Marketplace, which is already home to 26 integrations and is used by one in three business customers. Starling currently has 3% of the UK SME banking market.

Anne Boden founder and CEO of Starling Bank, said: “Our business customers work incredibly hard ensuring their companies thrive, but planning for retirement isn’t always factored in. The integration with Penfold will encourage them to invest and benefit from the government contributions and tax relief which can make savings go so much further.”

Once a customer opts to link Penfold with their bank account, they will be able to see the amount they have saved, their monthly contribution amount and any fluctuations in investments within their Starling app.  The new features will be available to Starling’s 180,000 SME customers from today.

Chris Eastwood, Co-founder of Penfold said, “The growth of self-employment in recent years has led to 15%* of the UK workforce market now working for themselves – that’s around five million people. Previously pension providers hadn’t progressed to accommodate the needs of this growing workforce. Our new integration with Starling further highlights the need for simple to use, flexible pensions for the self-employed, that are centred around excellent customer service.”

Government must ‘come clean’ with the public on pension age...