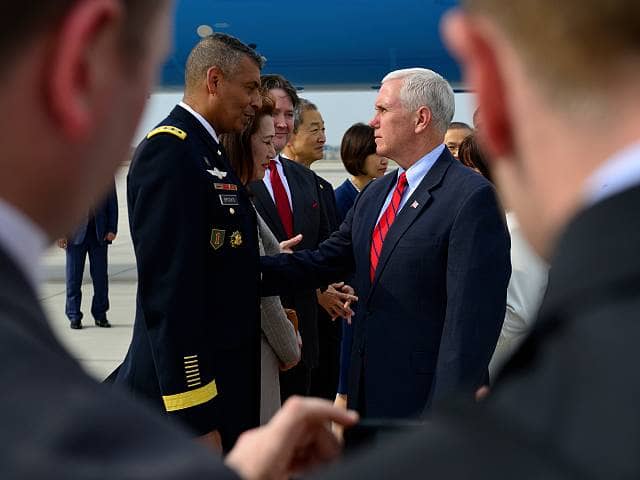 Pence warns North Korea the 'era of strategic patience is over'

Mike Pence the Vice President of the US said on his visit to South Korea that it would be unwise for North Korea to test the “resolve” of Trump.

Pence has agreed to the early deployment a missile defence system in the Korean region.  He said that the US commitment to South Korea is “iron clad and immutable” he then again said that “all options are on the table” for Pyongyang.

He said that the threat of North Korea to use any of their nuclear weapons would be met by “overwhelming and effective response.”

“Just in the past two weeks, the world witnessed the strength and resolve of our new president in actions taken in Syria and Afghanistan.”

“North Korea would do well not to test his [Trump] resolve or the strength of the armed forces of the United States in this region.”

Pence voiced his impatience over the North Korean regime saying that it has been quarter of a century since the US first confronted them over their attempts to build nuclear weapons. He added “But the era of strategic patience is over.”

“President Trump has made it clear that the patience of the United States and our allies in this region has run out and we want to see change.”

“We want to see North Korea abandon its reckless path of the development of nuclear weapons, and also its continual use and testing of ballistic missiles is unacceptable.”

Pence said to reporters that Trump is hopeful that China can use their “extraordinary levers” in pressuring Pyongyang to finally drop their weapons program.