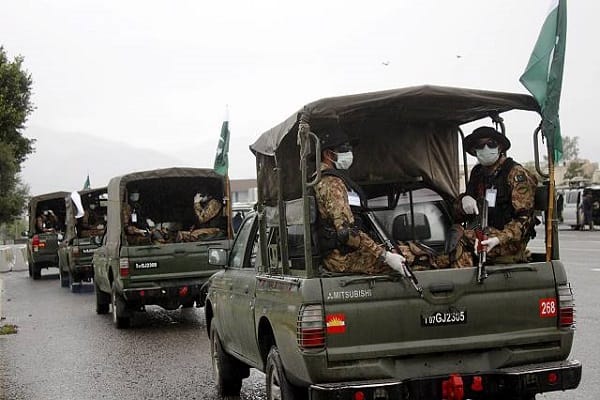 The Pakistan army have launched a series of “unprovoked” artillery attacks and small arms fire on India violating the ceasefire.

There was intense shelling with mortar attacks on the Line of Control (LoC) in Nowshera of Rajouri, India’s Defence Ministry confirmed the attacks on Friday.

The Indian’s Defence Ministry spokesperson, Colonel Devender Anand said, “At about 10.45am today, Pakistan imitated the unprovoked ceasefire violation by firing with small arms and intense shelling with mortars along the LoC in Nowshera sector of Rajouri district.”

Al Jazeera reported this week over four Pakistani civilians were killed by Indian shelling which took place in the Nakyal region and Baghsar.

“Today at 10:45am, Pak initiated unprovoked ceasefire violation by firing with Small Arms & intense shelling with Mortars along LoC in Nowshera of Rajouri.

In what could be seen as a tit for tat, Pakistan’s military press wing tweeted, “Indian Army troops initiated unprovoked [ceasefire violations] in Nakyal and Bagsar Sectors along LoC targeting civ[ilian] population.”

Nasrullah Khan told Al Jazeera, “Three people died at the spot, and they have just been buried.

“There was a single shell, and the three boys, who were cousins, were all standing together.”

Later it was revealed the two Indian officials were arrested for their alleged involvement in a “hit and run” incident.

The Indian government have also accused to officials from the Pakistan High Commission over the alleged involvement in espionage.

The Indian Ministry of External Affairs said: “The government has declared both these officials persona non grata for indulging in activities incompatible with their status as members of a diplomatic mission and asked them to leave the country within 24 hours.”

Also this week, the Indian government moved on to a war footing as warships and fighter jets were moved to the Malacca Strait within striking distance of China.

The Indian military have been given emergency powers to build up their reserves following the brutal hand-to-hand combat that took place on Monday.

The Economic Times in India reported that the Chief of Defence Staff General Bipin Rawat has been ordered to work with the country’s three armed forces in prioritising procurement requirements where necessary.