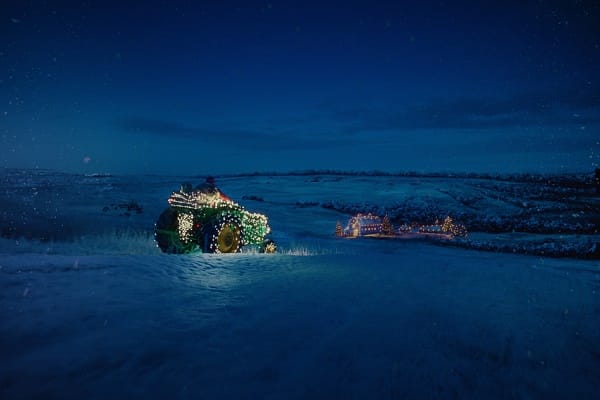 Morrisons is bringing back Farmer Christmas for the second year running as part of its latest Christmas campaign.

The character was so well received by customers last year, that Morrisons is building on that success.  Farmer Christmas has been integrated throughout the whole of this year’s campaign to highlight the great quality and value of Morrisons festive range, with his ‘seal of approval’ the common thread throughout.

The 60 second TV ad, created with Publicis Poke showcases the other hero of Christmas as Morrisons once again illustrates the work British farmers do to help make Christmas so special.

The spotlight is also on Morrisons own colleagues – many of whom feature in the ad – who are the “real life elves” who help make more than half the fresh food that Morrisons sells.

The ad follows Farmer Christmas, who we hear speak for the first time in his rich Welsh brogue, as he travels across his fields on a tractor to his festive workshop.

There we see Morrisons ‘elves’ hard at work preparing festive dishes made by Morrisons. Farmer Christmas introduces a Morrisons baker creating puff pastry mince pies in “magic ovens” (or normal ovens, as the baker clarifies), a fishmonger showing off smoked Scottish salmon, and a butcher who passes Farmer Christmas a traditionally glazed gammon joint, which he describes as being “like a big edible Christmas present”.

Viewers then follow Farmer Christmas as he travels on his tractor to deliver a festive feast to a family, before cheekily inviting himself to sit down and join them.

The ad finishes with Farmer Christmas proudly explaining that Morrisons is the “only supermarket to be officially approved by me” because of its commitment to British farming, its food makers and its great value Christmas products.  The ‘Officially Approved By Farmer Christmas’ stamp will be seen throughout the festive campaign in store and across paid media.

While the ad kicks off the festive season in Morrisons, some Christmas products have been on the shelves since mid-September to help customers spread the cost of this year’s festivities.

Other recent activities that have been introduced to help customers with the cost of living include cutting and then freezing the prices of 150 of the most popular products, the introduction of exclusive offers to My Morrisons members and the continuation of the Kids Eat Free All Day initiative in Morrisons cafés.

In the coming days, Morrisons Christmas Collector scheme will go live for eligible My Morrisons members enabling them to receive a significant money-off voucher to spend at Christmas if they meet the criteria and shop in the relevant weeks.

Rachel Eyre, Morrisons Chief Customer and Marketing Officer, said, “We know that customers are having to manage their budgets closely at the moment but they have told us they don’t want to compromise on the Christmas meal.

“We’ve brought Farmer Christmas back this year to show them the food and great prices that, thanks to Morrisons foodmakers and farmers, will be available throughout the festive period, all stamped with his seal of approval.”

Dave Monk, Publicis•Poke Executive Creative Director, added, “Farmer Christmas is back. This year with a twinkle in his eye and a tractor to match.

“As the authority on Christmas food, with a mouth full of his own wisdom and a sack full of Morrisons mince pies, he’s here to remind us all that the most precious moments at Christmas are the ones we spend around the table with our family, and that the presents on our tables make Christmas just as special as the presents under the tree.”

The ad was directed by Frank Todaro of Moxie Pictures and will launch on TV during Good Morning Britain on Monday 7th November, followed by network TV spots that include Coronation Street, Bake Off, I’m a Celebrity and Goggle Box. It will also be shown in cinemas throughout the festive period.

The wider campaign will run across radio, press, digital display, social media and out of home bringing Farmer Christmas to streets, as well as screens, across the UK.

This ad is the first in a series of ten Christmas TV ads showcasing Morrisons fresh food and festive deals to tie in with the World Cup as well as the Christmas period.