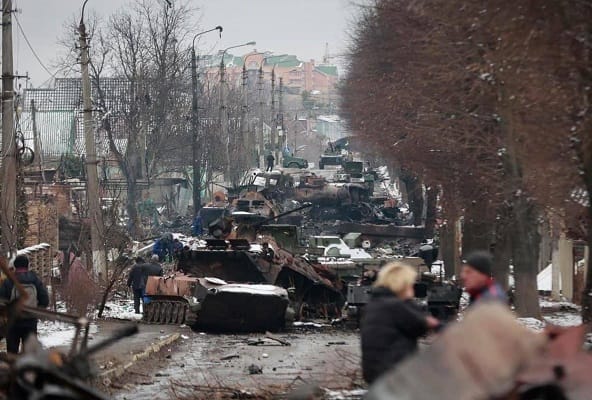 According to US intelligence more than half of Vladimir Putin’s troops have been wiped out, 75,000 have either been killed or injured and around 80% of the remaining military are bogged down in various parts of Ukraine.

During a US security and intelligence briefing held on Thursday evening thousands of Moscow’s fighter jets, tanks, helicopters, ships have been blown up which has cost the Kremlin more than $10bn.

At the start of the war there was around 150,000 and 190,000 Russian troops which means over half are either out of action, dead or have fled Putin’s so called “special operation” in Ukraine.

The Kremlin are also “preparing evacuation plans” for Putin as he is “aware of the possibility of a sharp change in the mood” in Russia amongst his officials and the families of Russian troops.

Kyiv’s regional governor Oleksiy Kuleba said, “Russia, with the help of missiles, is mounting revenge for the widespread popular resistance, which the Ukrainians were able to organize precisely because of their statehood.

“Ukraine has already broken Russia’s plans and will continue to defend itself.”

The British Ministry of Defence (MoD) said, “Ukraine has used its new long range artillery to damage at least three of the bridges across the Dnipro River which Russia relies upon to supply the areas under its control.

“One of these, the 1,000 metre long (3,300ft) Antonovsky Bridge near Kherson city, was damaged last week. Ukraine struck it again on July 27 and it is highly likely that the crossing is now unusable.

“Russia’s 49th Army is stationed on the west bank of the Dnipro River and now looks highly vulnerable.

“Similarly, Kherson city, the most politically significant population centre occupied by Russia, is now virtually cut off from the other occupied territories.

“Its loss would severely undermine Russia’s attempts to paint the occupation as a success.”